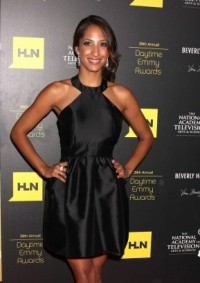 Yup, you read that headline right! And after reading this item that broke on TheWrap.com,  who wouldn’t side with Christel Khalil on this legal matter!

The fan favorite and Daytime Emmy winning actress who plays Lily Winters Ashby on the number one soap, The Young and the Restless  apparently is suing her agent for neglect, withholding her money, and this tops all… sending the beautiful lady out on an audition for Y&R, when she is already on the show as a contract player!  Talk about bobbling the ball! And after reading this, we fill badly for Christel!

According to TheWrap.com “Khalil filed a complaint against her talent agency in California Superior Court Tuesday, accusing it of stealing money and failing to send her on auditions — except for the one show she already had a contract for.   In the filing, Khalil says her agents, Mavrick Artists Agency, have repeatedly failed to uphold their end of the representation contract. She charges that during a very busy pilot season this year, she was only sent out on two auditions for series regular roles. She was not sent on any commercial auditions.  Khalil accuses the defendants of intentionally not paying her for a guest spot on 2 Broke Girls. The complaint also alleges the agency essentially stole money from the actress above its 10 percent commission.”

But the topper on this is … Mavrick Artists Agency allegedly sent Khalil out to audition for a role on her own show …Y&R!   The item went on to say, “At the time, Khalil was still in a contract role on the soap opera where she had been for 10 years, according to the documents. This, the plaintiff argues, proves how neglectful the agency has been with her career.”

So Y&R and soap fans, are you stunned as we are that an agent would send their client out for the same show they are already on contract for and mainstay of the series for over a decade?  Only in Hollywood!

Sounds like she A. Needs a new agency and B. made the right move to sue them! Good for her!

Lmao! I have no words! Well I hope it goes without saying Im sure this is going to be an easy win in court! :-p (Crossed fingers she gets a callback for the Y&R role. Ha.)

Everybody around YawneR is asleep!!! I can’t keep my eyes open
when I try to watch YawneR…neither can her agent!!! LMFAO!!!

I don’t blame her as she is too talented to be holding her back from other possibilities. I just hope she stays with Y&R as it has proven to be a success for her; an Emmy.
Good luck Christel.

She originated the role. Of course I see her as Dru and Neil/Malcolm’s daughter.

Since she’s not on contract, she can go for any auditions she wants.

Good for her, and I hope she wins.

She didn’t originate the role. Vanessa Carson played Lily as child. Christel didn’t start playing Lily until 2002. She is actually the third Lily.

Her agent is sleeping during YawneR.

How funny! Even her own agency finds her so dull they can’t even remember who she is or where she works.

Ah…..she doesn’t exactly set the screen on fire now, does she?

Between her dullness and her co-star Daniel Goddard’s sweaty creepiness, something just isn’t right in Genoa City!

Daniel Goddard is the Anthony Weiner of daytime he poses pictures of himself in his underwear on Twitter all the time. And as for CK is she that dumb that she wouldn’t recognize a name from Y&R since she has worked there so long. The only thing I have ever agreed with Victoria Rowell on is Davetta Sherwood was a much better Lily.

Maybe more of these actors DO need to audition and re-try out for their shows. There’s definitely a bias toward looks over talent.

UGH! Talk about ugly & agents not knowing clients, she has every right to sue….but is this old or new and just getting wind of this news? I could honestly say I personally wouldn’t mind if recast the role of “Lily”. Nothing personal against CK, she is the original and has done some fine work in the past but the last 5-6 years have been not her best strengths. Being “Lily” is an all important character to canvas which comes from the “Winters family” I would not be upset if a stronger A-A actress came to the role to expand… Read more »