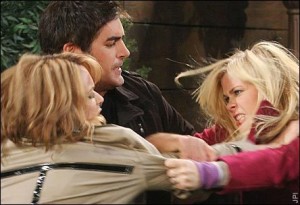 As we begin to see the final months of Alison Sweeney’s time as Sami Brady on Days of our Lives, the fan favorite has begun a fun social media look back at the memorable moments of Sami’s antics throughout the years!

Yesterday, Alison posted on her official facebook page: “Hey #Days fans! So, as you probably already know by now, I’ve already bid Salem farewell, but my scenes will be airing for a few more months. Having been a part of Days of our Lives since I was 16, I feel like I’ve grown up with many of you, and it’s so hard to say goodbye to all of you, and to Sami too.

This entire year feels so nostalgic, and I know it must feel the same way for you all too. So I wanted to celebrate my 22nd year as Sami with some of my favorite memories, and I hope you will chime in with your favorite moments too. I thought I’d used the hashtag #DaysofSami to keep it all in one place.  And if you have any suggestions – I’d love to hear them! Twitter user @Tmoore8114’s idea of Top Ten Lists is fantastic, I’m going start with that.  So here we go…”

And with that, Alison began her first list of Top Ten Chick Fights beginning with ” Sami and Nicole (Arianne Zucker) duke it out in the Hospital near Christmas.”

Sweeney noted on the fight scene: “Ari and I have always loved playing the physical aspect of ‘Sole’ (if Sami and Nicole had a shipper name). This particular one stands out for me because I remember some sort of stuffed holiday elf doll from the hospital set became an unwitting prop in our fight. The crew got such a kick out of our confrontation – as soon as the stage manager yelled ‘cut’ some of the behind-the-scenes people got in line wanting a chance to whack-a-mole with the stuffed elf. it was hilarious. You never know what’s going to happen when Sami & Nicole go at it!”

So, what other Sami brawl’s between the gals should be on this list? Weigh-in!

Will James & Lafayette Ride Off Into The Sunset On The TRUE BLOOD Series Finale? Nathan Parsons Chats It Up On Access Hollywood Live!

I am going to miss Sami so much! Salem won’t be the same without her.

Definitely the Sami/Nicole fight when Nicole came back to Salem after kidnapping Sydney!! And then Rafe had to break it up in the Town Square!!!

All the Sami fights are memorable….at least in the few years I’ve been watching. But, let’s give some credit to the verbal fights as well. The confrontation between Abbi and Sami, with Jen standing right there in disbelief , is priceless. …..behold Abbi, the fallen angel.

The food fight in the pub…please post that one OMG it was great!!!

Sami vs Nicole – fuzz on the details but they were on the docks having a str8 up brawl!

That’s what I love about Sami – she rarely just “slaps” anyone – she punches!

READ MORE
It's a Wrap For DAYS Galen Gering As He Shares Special Message To Fans: "I Hope You Know How Thankful I Am To Have Had You At My Side"