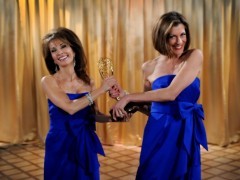 ABC Daytime and TV Land have joined forces to create an unprecedented network event where characters from All My Children and Hot in Cleveland cross over to continue a storyline established on last season’s Hot in Cleveland. The story revolves around Wendie Malick’s character, Victoria Chase, and her industry-nemesis, Susan Lucci.

“We are thrilled Victoria Chase will join the cast of  All My Children – there are very few actresses who could pull off a dual role performance as BOTH a maid and bartender. We hope she is up to the challenge,” teased Julie Carruthers, executive producer, All My Children. Brian Frons, president, Daytime, Disney/ABC Television Group, joked: “There is only room for one Erica Kane in Pine Valley, and Victoria Chase will unfortunately find that out the hard way.” Frons went on to say, “This is a unique opportunity to raise awareness of both shows with similar demos, and we expect each other’s viewers to follow from one show to the next.”

“We’re so happy that Victoria Chase will finally get to show All My Children fans why she is a soap superstar,” responds Larry W. Jones, president, TV Land. “We’re so excited to partner with All My Children to bring to life this classic TV form when television worlds collide.”

On-Air On-Soaps interviewed Wendie Malick right before the Hot in Cleveland season finale in  August, in which her alter-ego, Victoria Chase wins a Daytime Emmy and her on-screen nemesis, Susan Lucci accepts the award for her.   To read the interview click here!

Kathryn Joosten on bringing the reality of lung cancer to special eps of B&B!