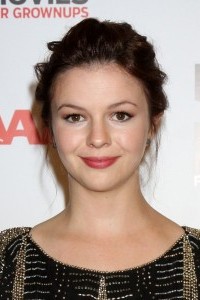 For those of you who watched General Hospital for many years, one of the most talented young actresses ever to appear on the show was Amber Tamblyn, who was the original Emily Bowen Quartermaine!  Of course, Amber has gone on to star in primetime television and motion picture projects.   However on Tuesday, Amber took to her facebook page to post a special message to her fans and colleagues just what it meant to start her career on the ABC soap.   Here is what she had to say!

Amber Tamblyn: “Yesterday was General Hospital’s 50th Anniversary and I couldn’t be more proud to call myself part of their family. GH is where I learned everything about my craft- the art of emotional intelligence, of listening, of interpreting, of setting a scene on fire.  It’s where I held Stuart Damon and wept when my real life Grandmother passed away, and where Stuart Damon held me and wept when Anna Lee passed away. Its where I learned how to be disciplined in what I do. Where I found myself, as an actress, as a woman, and as veteran. Its where I learned what having REAL fans in your corner can do for you: carry you into a confidence that most actresses only dream of. On GH, we burned for them and they for us. I absorbed the skilled techniques of John Homa, the turbulent genius of Maurice Bernard, the soft golden simplicity of John Ingle. Its where I had my first real life teenage secret crush (Shout out to you, Jonathan Jackson) and where I developed sister-strong bonds (double shout out, Kimberly and Becky).

General Hospital is more than an America staple. Its the staple gun.  I hope every actor has a chance to experience working on a Soap, and every kid gets to grow up watching one with family. Today I am thinking only of GH and this incredible, historic milestone.”

What do you think about Amber’s message GH fans? Did it touch you?  Let us know!

I love her. This is a very nice thing for Ms. Tamblyn to do. I so enjoyed her on JOAN OF ARCADIA, too, and I hope there will be other mass appeal projects to challenge her as an actress and to entertain us as audiences.

I liked her in Joan of Arcadia also. Was disappointed when it was cancelled. I saw
her in a hallmark movie today called Russell Girl….

A very touching and honest tribute. She is a classy, young lady, who sincerely appreciates her acting roots and what they instilled in her.

The years she was on were my favorite years of GH.

It was great! Thanks, Amber! And thank you Micheal for posting it!

Very well written, very heartfelt and very appreciative and grateful… she’s a very talented actress who’s grown into a lovely, grounded and intelligent woman. She was a great Emily! We are all lucky to have GH and the incredibly talented people who bring us a treasure!

I absolutely adore her! Her message was so touching and I love how proud she is of her days on GH and the show as a whole.

I liked natalia livingston better than amber in the role of emily. Amber was good on house.

Lovely and clearly heartfelt. Amber Tamblyn is the real Emily to me (loved Joan of Arcadia). I was never fond of Natalia Livingston in that role.

it was so beautifull, i wish she makes an appearance in the near future, it would be great to see her again on GH.

Beautiful and classy! How sweet of her!

Very nice Amber to pay homage to your beginnings and respect the medium and the actors.

Love how Amber not only acknowledges her soap opera roots, but loves and respects them enough to write this beautifully written post and share these sentiments. I loved her as Emily (I liked Natalia, as well) and I am so happy she has been successful in life afterward, yet is able to appreciate where she started out. 🙂

What a Lovely Lady…. Ms. Amber Tamblyn – Thank you….

for acknowledging…. daytime. Serials are much to do…. you have a fan for life… and it’s a feat to be recognized…

i’d scream and holler your star….

soaps are relished and belong…. moreso than most genre’s.

I remember your dad from Twin Peaks.