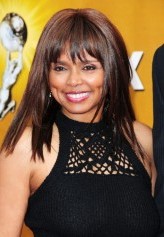 Many soap pundits and industry insiders are feeling like the beautiful Daytime Emmy statuette is about to land in the hands of one of daytime’s most treasured performers, All My Children’s, Debbi Morgan. And why not?  Given the story of her soap lifetime, playing Dr. Angie blind and pregnant at the same time is no easy task, but Morgan did it and received a nomination for it.

TV Guide caught up with Debbi to ask her about the recognition, the cancellation of All My Children, the next beat in the baby-switch saga, and if there is any truth to the rumors that she would end up on Y&R.   Here are just a few excerpts!

Morgan on being nominated in the Lead Actress category this year, after winning her first Emmy as Supporting Actres decades ago:  “I’m over the moon with the nomination and so happy to be going out with such wonderful material, but the thought of never playing Angie again is too much to bear. To look back and realize I started playing her in the early ’80s — 30 years ago! — is such an emotional thing.”

Morgan on why she was not really surprised by the cancellation of AMC: “When all those cancellation rumors first came out and sort of lingered, I knew there had to be some truth in it, especially because the network never said anything to us. It wasn’t like ABC was denying it. I had it in my gut. But I never imagined it would happen so quickly. We knew the ratings were going down and that soaps aren’t what they used to be, but to be cancelled so suddenly, so fast? To have just three or four months to wrap things up was the part that was absolutely shocking. I thought maybe they’d give us a year. To think this is the end of Erica Kane! She’s an institution. It’s like the end of a dynasty.”

Morgan on Angie finding out the truth about the baby-switch and getting her eyesight back before the end of the series: “I know she will eventually get her eyesight back, but I have no idea how this baby story turns out. I’ll tell you one thing: I don’t want the birth mother reclaiming that child! Angie does find out that this really isn’t her kid but in terms of what happens with the real mother — Will she take the baby and run off? Will Angie keep the baby? — I just don’t know. Since we have so little time left with the show, they’ll want to end things on a happy note, so I’m thinking things are going to work out just fine.”

Good luck Debbie. I hope your phenomenal talent is rewarded with another Emmy this year. You seriously, genuinely, beautifully and truly – ROCK!