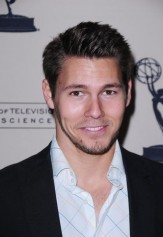 The Bold and the Beautiful’s Scott Clifton (Liam) is up in the Younger Actor category for the fifth time at this Sunday night’s38h Annual Daytime Emmy Awards!  Now as he is finally over 25, this is the final year he will compete in this category.  And with a stellar reel, could Clifton finally end his curse and win the gold?  Well, TV Guide Canada’s, Nelson Branco chatted with Clifton about Emmy hell, if he would ever reprise his first soap role of Dillon Quartermaine on GH, and having to say goodbye to his former stomping grounds at One Life to Live, now that it has been canceled.  Here are a few interesting moments from the interview!

Clifton on his choice of Emmy reel in this year’s race: “I liked the scenes I ended up competing with because last year, when I was nominated as Schuyler on One Life, I felt that my episode was too actor-y, shticky, and over the top – and I ended up paying for that.  My reel last year was very sarcastic, with one real moment where I got to be emotional. This year, I tried to go in the opposite direction. I wanted something more intimate, small, subtle and internalized. We’ll see what happens.”

Clifton if now that GH is being re-set and an offer would come to reprise the role of Dillon Quartermaine, would he go: “I don’t think I would go back,” he asserts. “Certainly, (not) as long as I am on B&B. If I were fired, and needed work, yes, I would come back to GH if they wanted me. But I don’t feel any desire to return to GH because I feel proud of what I was able to do over there at that point in my career. At this point, it would be hard and confusing for me to reprise Dillon at this stage. I’m having way too much fun here on B&B as Liam. Having said that, I think GH is a great show to work on but I prefer B&B, which may be selfish.”

Clifton on the cancellation of One Life to Live where he played Schuyler Joplin: “All My Children was one thing, but it was really shocking that One Life was cancelled. It was like ‘holy shit’! It’s tragic, because there are so many people on that show that are like family to me. And I’m not just talking about the cast, but the crew as well. But I’m trying to put a positive spin on the situation because I’m so psyched for actors like John Paul Lavoisier and Bree Williamson to go into prime-time TV and movies. I know they’ll get work and make it big. But watching a soap opera get cancelled is so much more impactful than any other medium because of the longevity.”

Jessica Heap set to debut as the new Eden on Y&R!

So, I take he hasn’t heard the very credible rumors that JPL is a) headed to GH and b) going to be taking over the role of DQ.

What? Wow, that would be cool! I didn’t hear that rumor.

After JPL’s controversial (yet politically-correct) responses to OLTL’s cancellation, and both he and Farrah Fath announcing that they were headed to LA, there was a lot of talk that he might have begun negotiations with Frons (his golf buddy) to join GH. Then there was the announcement that he was leaving months before the cancellation, and Garin Wolf declaring, “Sometimes they come back” and the revival of the Quartermaines, followed by Ravenbeauty claiming that 2-3 OLTL cast members will be joining GH. Given SC and JPL’s similar acting style and sense of humor, and SC’s apparent aversion to returning, it… Read more »