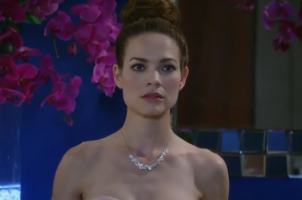 On part three and the conclusion of General Hospital’s Nurses Ball 2015 episodes, all eyes were on Elizabeth Webber (Rebecca Herbst) and what she would do next!  After learning from Nikolas (Tyler Christopher) that Jake Doe is really Jason (Billy Miller), Liz heads into the ball to stop the proceedings and take the stage to tell everyone in attendance including: Carly (Laura Wright) Jake himself, Sam (Kelly Monaco), Patrick (Jason Thompson), Michael (Chad Duell) and more that Jake is really their beloved Jason.   Only when it’s her moment to reveal the truth, she stops herself and then launches into a touching former Nurses Ball moment to cover her tracks.  Elizabeth recounts the time that Jason saved Robin (Kimberly McCullough) on the stage, and tears flowed not only from Nurse Liz, but Anna (Finola Hughes), and Patrick and Carly, too!

After exiting the stage and running out into the hallway, Nikolas finds Elizabeth in tears on the floor.   And then came the turn – Elizabeth, just as Nikolas had revealed he was over being the nice guy and getting stomped on for the last two years of his life – decides too, that she will keep the secret that Jake is Jason.  Liz rationalizes it will keep Jason away from Sonny (Maurice Benard) and Carly, Sam and everyone who got in the way of her chance at happiness with Jason in the past.  Now she says it’s her turn to be happy after years of being betrayed by the men in her life, especially just after what happened with Ric Lansing (Ric Hearst).  Nikolas questions her if she is prepared to carry this burden and this lie, and its implications – she is afterall keeping a father away from his wife and his son – to which Liz tells Nikolas if he ever loved her, he will do this for her and keep quiet as well,  and thus sealed the deal! These once former lovers, Nikolas and Elizabeth, are now both carrying the secret of Jake’s true identity for their own very different agendas.

As for long time General Hospital cast member Rebecca Herbst, she delivered a magnificent, nuanced, and emotional performance that will be remembered for some time to come.  The audience felt Elizabeth’s pain, heartbreak, defiance, and ultimately seeing her decide to step up and take what she believes belongs to her no matter what the cost, as so many other characters do on the soaps!

But the Nurses Ball wouldn’t be complete without the hankie-filled final moments to the now staple tune, “You’re Not Alone”  sang this year jointly on-stage by Sabrina (Teresa Castillo) and Ephihany (Sonya Eddy).  As the song plays out, GH fans watch as key poignant scenes tell the story along with the song.  First, Nikolas returns home from the ball to see son Spencer (Nicholas) without his mask covering his scars on his face.  This came about after a heart-tugging moment between Spencer and his late mother Courtney (Alicia Leigh Willis), who paid him a heavenly visit.  Courtney was able to help her young son get the strength to solider on and remove the mask.   In one final scene, Nikolas and Spencer are touched by the hands of Courtney as we see a momentary family reunion.

And then came the conclusion, the final scene.  As everyone in attendance had joined hands on stage in the now traditional ending of the  Nurses Ball,  Jake happens upon it.  We see him from the back looking on at all these people he knows and loves, but can’t remember.  Next, he turns around and Elizabeth is there who he has been looking for all night, since Ric’s scheme was outed by Carly.   As the door closes behind him, Jake AKA Jason heads towards his new life with Elizabeth!

Watch the final moments and the performance of “You’re Not Alone” below.  Then weigh-in:  What did you think about Elizabeth’s decision?  Do you think she will be able to pull this off and keep Jake from ever finding out he is Jason?  What did you think about the performance of Rebecca Herbst? Did you reach for the hankies in the final moments between Nikolas/Courtney/Spencer and Jake AKA Jason and Liz?  Share your thoughts below!