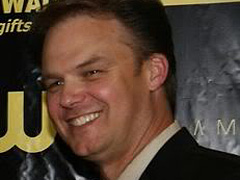 ATI’s Jim Romanovich spoke exclusively to On-Air On-Soaps this morning to give us the low down on some burning issues for the fans, as we addressed concerns from last year’s Daytime Emmy Telecast.

But, first off, as everyone knows by now, the Daytime Emmys are back on CBS and network television, and going to be broadcast from Las Vegas on Sunday June 27th.  Good news – is the show is back at 9-11PM slot, bad news is there will be no Pre-Show Red Carpet Special as it stands now.  Throughout the interview Romanovich spoke frankly about ATI’s plans that would be close to daytimers hearts, including an ATWT tribute and Lifetime Achievement award.  Here are some excerpts below!

Jim on if their is plan for an ATWT Tribute or any other soap related segment: “I don’t have a game plan yet, because we are waiting on those who make those decisions to tell us.  I met with TeleNext in Cannes.  I said, “We are planning to do the Daytime Emmys on June 27th, and I wanted to talk about getting the ATWT cast there so the possibility of a tribute can be done.”  And they said, “It’s a bad week.  We are shooting our last episodes right around that time.  I don’t know if we can even make it.”  So, we are trying to figure out what to do there.  I mentioned Julianne Moore to the Academy and CBS.  I would love her to do this.  We are going to do everything we can to do something for As the World Turns.  I did not think there would be an ATWT tribute for these reasons: One, the cost value of getting everybody out there.  Two, P&G, TeleNext and NATAS wanting it to happen… and three, CBS wanting it to happen. You saw the interview with the P&G guy who said, “We are out of the soap business,” and that does not bode well for helping with the Daytime Emmys.  I think people that watch the Emmys are soap people.  I know that.  I am pushing for things involving the soaps really hard.”

Jim on Lifetime Achievement Recipient: “I can’t give too many detail. We did not choose the recipient, but NATAS did and that person has not been contacted yet.  If they agree, then they will be honored by it. I think a lot of people in the soaps would agree and will love it. “

Very good article, I hope to god they give it a decent tribute not a 5 second wave like the kind of treatment that GL then got. cut off. For god sakes there the longest running soaps and the last soaps in N.Y. Please call these numbers and demand a decent ending.

Why didn’t the morons have it in New York, that would have been fitting?

Why not do the tribute via Live for New York with the cast.
I’m tired of CBS’s excuses of why “they can’t do it” . There is a solution to every problem…you just have to want to find it!
Give As the World Turn’s , the cast & crew and it’s fans the tribute it deserves.
After all for many years this show made CBS alot money.
So “man up” and do the right thing!