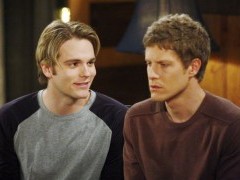 The fantastic Van Hansis spoke with AfterElton.com at the recent ATWT Fan Club Luncheon about many things that soapers want to know, namely; how is working with Eric Sheffer Stevens, and his thoughts on the Luke/Reid pairing.  Van also addresses his feelings on the end of World Turns, and  Luke’s story, as it comes to its conclusion in the fall.  Here are some excerpts, but make sure to read the entire interview, especially about serial killer, Nancy Hughes!

Hansis on the success of the character of Reid: “I think that’s a testament to Eric and also I think he’s a very unique character. There aren’t [many] soap characters who can come on and basically insult everybody in town and still have a lot of the audience on their side. It’s very rare. But the character is a lot of fun. I think lots of people, even if they hate him, it’s like a love-to-hate kind of thing.  I don’t think I’m surprised at how interested people are in the story because I think … the stakes are a lot higher in this story than a lot of the other stories. Like for instance with Mason [Jarvis, played by Forbes March], there was no real threat to them. The threat came out of Luke’s actions. And in this story there is a threat, so I think of course the fans are a lot more up in arms about it.”

Hansis on his thoughts at ATWT comes to its conclusion: You know, it’s sad. We were told almost four or five months ago, so I’ve definitely made peace with it. I’m always going to look back really, really fondly on my time here and it’s been more than I could have imagined. Sometimes I’m still, to this day, shocked that I’ve been here for these last four years and it’s truly been a blessing and I’m so, so happy to have been a part of it. That being said, now that we know it’s over, I’m excited about what comes next.

Will Genie Francis come back to GH this summer?

VAN HANSIS is the best actor ever! Luke’s chemistry with Reid is intense! Van is a powerful actor! WOW

I am so into the Luke and Reid storyline I cannot imagine that ATWT will ever end. And these two beautiful people must be together or there’s no justice in afternoon fantasyland. My congratulations to two superb actors!

You wrote this in May so maybe by the end of the show you will have reconsidered.Luke and Noah were children while Luke and Reid were men who took the best from each other and fell in love.Their chemistry was like no other.I love Luke and Reid together and no actors could have done it justice like Van and Eric.Fabulous …..and I miss them!

I Think That Reid And Luke Will End Up Together Because Noah Hurt Luke By Being With Someone Else.

Luke is conflicted for now, but it is clear that he wants to be with Reid, but what I don’t like is Reid always being so insulting and mean towards Luke, badly judging every Luke’s action. I want Luke to be happy with Reid, not always sad and depressed that Reid is treating him like crap, like Noah used to do. Luke deserves a man who loves him with tenderness and kindness.

I totally agreed, the last two episode, Reid really mean to Luke, I hope he don’t continue to do that, Luke deserve someone who care and love him 100%

Luke and Reid definitely should be together in the end. I hope it ends with their wedding. Maybe a triple wedding Luke/Reid, Katie/Chris, Barbera/Henry. Would that be great.

By now we all know that Reid has died and luke is grieving.What a sickening ending for two great characters who changed each other for the better.Everyone is getting a happily ever after except Luke and Reid.So sad…we got to love them together and now ATWT ends on a sad note.This really made me cry at the unfairness of it all!