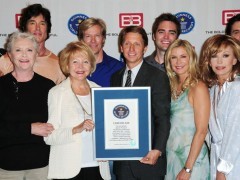 On-Air On-Soaps was on the set today of The Bold and the Beautiful where the cast and crew celebrated that the series has been named the “Most Popular Daytime TV Soap – Current” by The Guinness World Records .   An adjudicator from Guinness book was on hand at Stage 31 to hand over the certification of the coveted distinction to B&B’s Emmy Award-winning Executive Producer and Head Writer, Bradley P. Bell, and the Cast.

Bell, surrounded by cast members including Ronn Moss, Susan Flannery, and Katherine Kelly Lang, said, “We would like to thank our millions of viewers around the world who watch us every day, whether they are in Paris, Texas, or Paris, France; Duluth, Minnesota or United Arab Emirates. They are the reason this is happening here today. We never lose sight of that.”

B&B’s  international ratings success is unequaled in its genre. The series can be viewed on more than 45 broadcasters in over 110 countries. In the 66 countries and territories where there are scientific people-meter systems in place to measure television viewing audiences, B&B  garnered 24.5 million viewers in 2008—a higher figure than any other telenovela or soap opera.

More tidbits from the event with Brad Bell, Ronn Moss and the gang coming soon!

ATWT"s Noah & Reid headed for a fist-fight over Luke?

Please interview actors that the fans care abt like the intelligent Susan Flannery, opinionated Hunter Tylo, popular KKL and talented Alley Mills; and not second string, aste of airtime actors Gareis, Jones, Beemer and SJB like in your previous interview. B&B is popular because of the actors that portray the characters of Stephanie, Brooke and Taylor, while Pam is a hoot!