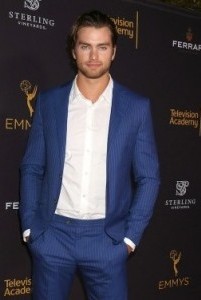 The Bold and the Beautiful’s Pierson Fodé (Thomas Forrester) is becoming a very hot property in Hollywood.  News this week out of Deadline is that Fode is about to star in Fritz Mitchell’s sports film It’s Time, based on the true story of NCAA footaball players Roy Lee “Chucky” Mullins (played by Roots Sedale Threatt Jr) and Brad Gaines’ (Fodé) friendship.

The story is reminiscent of the 70’s hit made for TV film, Brian’s Song about two players who become friends (Gayle Sayers and Brian Piccolo of the Chicago Bears) and brothers in the face of tragedy.  In It’s Time, after a tragic accident during a Vanderbilt vs Ole Miss college football game in 1989, Mullins was paralyzed when making a hit on Gaines, a running back from Vanderberbilt. Both men lost something that day; Mullins lost the ability to move and Gaines, a man of faith, suffered a loss to his spirit. The two eventually became friends, and ultimately brothers.

Timmy Richardson and Bradford Gaines Jr. (son of real-life Brad Gaines) co-star. Wendy Yamano of Mt. Phil Films is producing. Mitchell and Yamano were the team behind the documentary of the same name that aired on the SEC Network. The script was written by Jeff Sarokin and is currently being shot in Mississippi.  Fritz Miller originally produced the ESPN documentary on the two players story on the series 30/30.

Pierson took to Instagram to share his enthusiasm at the scripts for the film:  “THE SECRET IS OUT!!! OUR NEW FILM “ITS TIME” So proud to be apart of such an incredible and heart breaking TRUE story. My life has already changed in so many ways since picking up this script. Spending time with #BradGaines , understanding how tragedy rocked both his Chucky’s (portrayed by the great @sedale3t ) lives. Most importantly how a deep friendship and love was created and never lost. To see the story Check Fritz’s @espn 30/30 documentary “It’s time” on @netflix”

As for Fodé, he last starred in the movie Naomi and Ely’s No Kiss List opposite Victoria Justice.

So, what do you think of Pierson’s new role in It’s Time? Comment below!

DAYS Arianne Zucker Speaks Out On Being Thrust Into Public Spotlight: "I'm Ready To Use It For Positivity"

Looking so forward to this movie with Pierson.