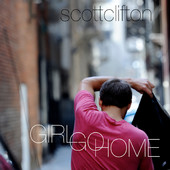 We have always known that The Bold and the Beautiful’s Daytime Emmy winning, Scott Clifton (Liam) was one talented man.  However, more proof positive of that is his just released first music album of his work on iTunes!  The title of which is “Girl Go Home”.

Clifton has released several of his songs which include tunes that we are already loving such as “Stain”, “The Inside-Out”, and “Stranger” which feature Scott’s vocals and songwriting.  Check out the sample of the songs here, and let us know what you think!

Scott tweeted “After years of procrastination, I finally put together some songs I wrote and released them on iTunes, I’ve always been very self-conscious about this.  I’m not a singer, and performing music on a stage terrifies me. But I love writing lyrics and music, and I wanted to share that part of me, warts n’ all. Take a minute, listen to a preview or two, and see if my music is something you like. It would mean the world to me. Thanks guys”

What do you think of Scott’s sound on the tracks? Let us know!

Please let him sing for his many adoring fans.

That’s great but more importantly will you B&B writers please wrap up the yrs too long
Hope/Liam storyline. Let them just live happily ever after, and me too.

I don’t lke Wyatt because he came onto Hope right in Liam’s home and he is way too pushy! Hope is in a lot of ways a bit innocent! I can’t see a girl raised in the way Hope has been raised as a Forrester married to a once nobody like Wyatt.
He has nothing to offer her except sex IMO but being married to Hope gives him and his mother a secure future.

You go, Scott! I listened to your album on iTunes and I enjoyed it. The acoustical guitar was a very nice touch. I hope the Bold and the Beautiful showcase your vocal talent.

No, you are not the only one who does not ilke Wyatt. I don’t like his acting either. I really haven’t liked him since day one. He makes faces that don’t seem appropriate to me. I’d be happy if Hope went back with Liam, & Wyatt & Quinn just disappeared.

I really hope Scott’s music career takes off so he can leave B&B and we can finally end the crappy love triangle storyline.

So I searched Rhapsody and came up with nothing… YouTube… same. I finally found a site called “SoundClick” to listen to some of what appears to be Scott’s older music. I’m a writer myself, though of books, and I’m always searching for something inspirational to guide my thoughts while I write. I heard the song Gravity (I believe thats the name) on yesterday’s episode of B&B. Wondering if there is anywhere else to purchase aside from iTunes.