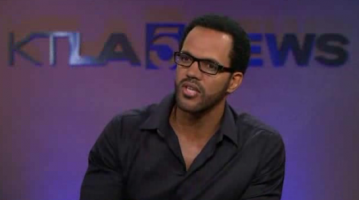 Daytime Emmy winner Kristoff St. John (Neil Winters) of The Young and the Restless appeared this morning with Sam Rubin on the KTLA Morning News in a segment to discuss his documentary, A Man Called God.

The film was shown this week as part of the Beverly Hills Film Festival, and most recently won the 2014 Best American Feature Documentary at the AmDocs Festival in Palm Springs.

A Man Called God is about the real life story of Kristoff’s family trapped in a cult, after his step-mother convinced his father, actor Christopher St. John, to travel to India and live in the ashram of Sai Baba.  At this time, Kristoff was a young teenager.

As detailed in the KTLA interview, Kristoff says his family was of the Hindu faith which was the preliminary steps to visit Sai Baba.  He also says it was easy for people to get swept away by this  man and his mind control.  St. John elaborates that he knew something was amiss half way into his family’s stay, when Kristoff wandered outside the ashram and talked to some other westerners and found out about the corruption and the deception of this cult leader.

Watch the segment with Kristoff on KTLA after the jump! Then, let us know your thoughts on the documentary and the story contained within it?

Thanks and praise to God for rescuing Kristoff from that.