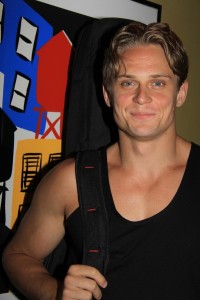 With all the talk of former and current soap stars who should be play the S&M hottie billionaire Christian Grey in the motion picture version of 50 Shades of Grey, now comes word out of E! Online that former As the World Turns hunk, Billy Magnussen (Ex-Casey) is indeed in the running and will test for the role of Christian Grey tomorrow.  As everyone knows by now, Sons of Anarchy star, Charlie Hunnam dropped out of the role earlier this week and now the producers are scrambling to find the new Christian as production was set to start next month!

Magnussen, whose career has skyrocketed over the past year, earned a Tony nomination for his work last year in Vanya and Sonia and Masha and Spike, and he is s currently filming the movie adaptation of the Broadway musical Into The Woods, playing Rapunzel’s Prince opposite the likes of Meryl Streep, Johnny Depp and Anna Kendrick!

In addition, E! learned that former Home & Away star, (Australia’s long running soap) Luke Bracey is also in contention.  Bracey played the role of Trey Palmer on the sudser, and was recently spotted with none other than Selena Gomez at the Golden Globes!

So, what do you think of Magnussen for the role of Christian Grey?  Seems like the role may go to a relative newcomer to movie audiences, which may be a good thing!  Weigh-in!

He;s sexy, But Tom Pelphrey would make me go see it!

I love his work and think he could pull this off.

I am not familiar with Magnnussen’s work but he is a good looking young man – might work!!!!!!

Can you say “career suicide?”

I think it’s wonderful for Billy to be given this chance. But there is another former star from ATWT who would be awsome as Christian Grey namely Eric Sheffer Stevens, who played the role of Reid Oliver on ATWT. His looks, charisma and body should be perfect for this role!!!!! Give him a chance!!!!!