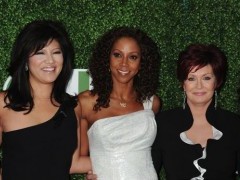 CBS’s mommie gabfest, The Talk had been renewed for another season by the network.  The Hollywood Reporter broke the news.  The network announced the pickup Wednesday after several strong week’s of ratings. The Talk is averaging 2.2 million viewers since it premiered last fall.

Hosted by CBS News’  and Big Brother anchor, Julie Chen, along with Sara Gilbert, Sharon Osbourne, Holly Robinson Peete and Leah Remini, the series, according to CBS is resonating with the viewing audience. Nina Tasler, President , CBS Entertainment stated, “After only a few months on the air, The Talk has delivered creative and ratings growth and established a strong profile in daytime. The co-hosts have clicked together, the topics have connected with the audience and the show has added a new dimension to our top-rated daytime line-up.  We’re excited about its current success and the potential to grow and evolve The Talk even further.”

David Stapf, President of CBS Television Studios chimed in stating, “”We’re proud that The Talk has emerged as a unique player in the daytime arena. The goal was always to create a show that offered different perspectives to issues facing families.  The show’s success is largely due to our hosts’ chemistry and we’re thrilled that the topics we are addressing are resonating with audiences.”

This is not boding well for soaps, folks!  On-Air On-Soaps misses our beloved resident of Oakdale!

Kyle Lowder is officially OUT at The Bold and the Beautiful!

GH's Bob Guza on the reveal that Michael was brutally raped!

Julie Chen must be sharpening her claws!

Love all the ladies, that is what makes the show. It’s a discussion forum, anyone and everyone should talk about all the news regardless if Julie is there or not. Leah you and your mom need to follow the rules and Leah tone it down — you are so loud.

I watched the Talk faithfully first season and loved it but if Leah and Holly leave there goes the show. Leah is funny, Holly has the “mommy” experience and Sharon is wonderful funny, and experienced. Julie and Sarah are the worst two on the show and it looks like they are the only two left i watched the first show yesterday and shut it off the two new women are terrilbe I won’t watch again. Effie V