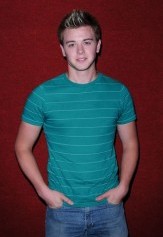 The moment is finally here when on Monday’s January 31st episode of General Hospital is it revealed that Michael was indeed raped in prison, and what everyone had thought all along was indeed true. (Well, sort of)

The head scribe of GH, Bob Guza spoke in detail with TV Guide in this exclusive look into why the decision to have Michael raped, and how the revelation will come about and how the parents and mentors in Michael’s life, Jason, Sonny, and Carly will deal with Michael’s moment of truth.   Here are a few excerpts!

Guza on if he delayed the reveal due to the uproar that the audience did not want to see rape-plot: ” Not at all, though we at the show felt the same way the audience did. I remember the day we sat down and I was pitching this idea to [ABC Daytime chief] Brian Frons, and we were all going, “We love Michael! Why would we do this to him?” But that was the very reason to do it — because it’s real, because it would happen to a character like him under those circumstances. It’s almost a fantasy to think it wouldn’t! Uproar from the audience was to be expected, but the only honest way for us to tell the story is to really deal with the reality of prison life. We’re doing all the proper research and handling the aftermath as responsibly as possible. We’ve been working closely with the organization RAINN [the Rape, Abuse & Incest National Network] and we will be doing a PSA at the end of the January 31 episode.”

Guza on what event is the catalyst to Michael spilling the beans of his rape: “Michael will see Abby (Adnrea Bogart) about to be raped by her ex-boyfriend and he flashes back to what happened to him in prison and goes berserk. In that flashback, we’ll see Michael’s assault in more detail, though nothing gratuitous or titillating. We wanted to make it clear the assault on Abby has visual and physical parallels to the assault on Michael. The incident with Abby — Michael does save her before she’s actually raped — will serve as a kind of catharsis for Michael, and he is finally able to admit to Jason (Steve Burton)  that he was indeed raped. He then tells his parents, Sonny (Maurice Benard) and Carly (Laura Wright).

Looks like this will be must-see February sweeps soap viewing and the reactions and performances from Duell, Benard, Burton, Bogart and Wright could be five hankie time.  Stay tuned!

CBS renews ATWT's replacement "The Talk" for another season!

Can’t wait to see this! Will Michael be tested for HIV or have discussions about it with Robin/Jason/Sonny? I think it’d be really interesting to see Carly face her past issues with HIV+ people when her son has HIV.

Also I know this wouldn’t happen but getting Liz and Lucky involved would be great. They could share their insights as Liz’s rape was one of the best stories that GH has ever done. It’d be nice if they had a nod of history towards that!

Thanks for the scoop!

Been waiting for this since June. Emmy-worthy no doubt!

Lets make one thing clear to Guza & Frons. You love Michael. I WAS forced to deal with him over & over & over & over again. Not to take away from the actor(s) but I had MORE than enough of Michael. Therefore, I could really give a cruddola what happened to him in prison. I was over the prison story the day it started & I certainly did not want to revisit it. That all being said. I am not watching General Hospital any longer. I stopped watching January 18, 2011 when the announcement of Rebecca Herbst & Elizabeth… Read more »

If General Hospital actually wanted to do the responsible thing in the telling of this story they wouldn’t sleaze it up with strippers and hookers. There is only ONE other rape survivor left on this show and that is Elizabeth Webber. But they did the irresponsible thing and fired the very talented, very popular, Rebecca Herbst. If they had included Elizabeth Webber in this story, I MIGHT have thought this offensive, sleazy story could be redeemed but without Elizabeth Webber on General Hospital, my long time loyal viewership to this show is OVER.

I hate this storyline but to a point I understand it. My problem is that the one person that has been brutally raped on the show should be the one involved with it. She understands what he is going through and has had to pick herself back up and go on with her life. I think the fact of how this storyline has played out is what makes me hate it the most. In order to help an 18 year boy through this first we have someone get him someone to sleep with. Then you set him down the course… Read more »

Guza and Frons don’t have a clue what their audience wants-that is very clear! I have not doubt Guza will mess up this storyline just like he does every other one!

I Hate the idea. I Hate Abby, she’s too old for Michael, she should ride off into the sunset with her loser ex-boyfriend.

Love Michael & Abby & this entire story is why I watch GH right now!
Chad & Andrea are fabulous together & cannot wait for his scenes with Laura, Steve, Maurice, to play out.

This is one of GH’s stronger stories. Chad Duell should be very proud his performances lately. Great young actor. 🙂 I, too, would like to see some scenes between Robin and Michael.

I love the story. I think it will definately bring depth to all invovled. Chad is a great actor and is doing this story very well. For all those who feel that Liz should be involved is just crazy. Why? I feel bad she is leaving the show, but this is about Michael, not Liz. And for all those who are not going to watch anymore because she is leaving, and feel that this soap will be nothing without her? Really? what does that say for all the others on the show. Come on Liz has never really been a… Read more »

I think the General Hospital rape story was one of the greats. It just goes to show you we should always pay attention to our children and whats going on with them by talking!!! Oh by the way i think the Elizabeth story lines are out of gas, I think she will find something else real soon.