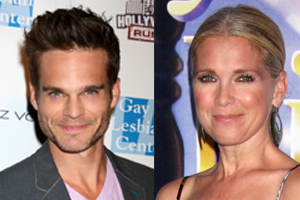 Over the past few days On-Air On-Soaps has been following the Chick-fil-A mess and the restaurant  chain’s stance on gay marriage.  And while many soap stars have denounced the popular fast food chains bigoted remarks, the situation was also under fire by Advocate.com, the leading LGBT platform.

In addition, The Young and the Restless, Greg Rikaart (Kevin Fisher) took to Twitter to voice his disdain and displeasure over the weekend for Days of our Lives star, Melissa Reeves (Jennifer Horton Deveraux) controversial tweet which was, “Chick-fil-a today!!!! Loved every bite of it;)!! Land of the free and home of the brave.  Love that we all appreciate free speech, right?”  On face value, it appears that Reeves took part in Chick-fil-A Appreciation Day.   Rikkart tweeted “Melissa Reeves, it’s  disappointing that you’ve aligned yourself with a company that supports hatred & bigotry. This is not an issue of free speech.”

Later Advocate.com, the leading LGBT news site posted a piece on Reeve’s tweet and pointed out what the Chick-fil-A issue is really about,  “Actually, the message that got somewhat lost in the Chick-fil-A controversy is not that company president Dan Cathy shouldn’t be able to state his opposition to marriage equality, but that the company is funding anti-gay organizations that have been designated “hate groups” — and LGBT people and their allies don’t want to be funneling money to them.”

Whatever the case, and the intent of words used in tweets, freedom of speech, your stand on gay marriage, bottom line (according to Advocate.com) is Chick-fil-A appears to have a bigger agenda of bigotry and hate.  However, many feel this is just about a freedom of speech issue.   And, whether you are straight or gay, people should have the right to feel safe from harm, and have basic human rights.   What do you think?  Weigh-in Soapers!

THIS WEEK: The Season Finale of DALLAS – What Will Happen?