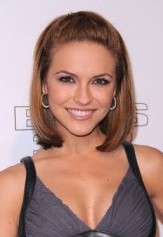 The beautiful and talented Chrishell Stause (Amanda, AMC) shared her thoughts with TV Line about the very upsetting decision by Prospect Park to abandon their plans to bring All My Children online, plus what happened to the original ending of the 40-year-old soap! And, Stause talks about her upcoming guest-star turn on ABC’s Body of Proof  airing Tuesday night on ABC 10/9CST.    Here are a few excerpts below!

Chrishell on her thoughts on Prospect Park, although she had not agreed to sign on with AMC online at this point in time:  “To be honest with you, that Prospect Park thing was such a disaster. They came to people and gave one offer, and when it came time to renegotiate they never came back to the table. It wasn’t the actors that weren’t trying to make something work. I was always open to doing it as long as I could do it while doing other things. I certainly didn’t want [Prospect Park to have] exclusivity.  I know how devoted the fans are, and if we could have made that work, it would have been great to do it. I’ve done a web series before, so I thought I could swing it and other projects on the side, but then I just never heard back.”

Chrishell on if an alternate version was shot of the AMC finale, just in case things bottomed-out with Prospect Park before they shot their final episode:  “We did shoot a different version, and I love the version we shot originally. But then the Prospect Park thing came about. We only had Kate Collins [who plays Amanda’s mother Janet] for a few days, so we had to shoot our ending with her really, really early. And then the Prospect Park thing happened and they changed the ending to what you saw. What’s sad is that I know what the ending as supposed to be, so I feel like the fans were robbed. We all had these vignettes that were beautiful and really great, so that’s the biggest regret.”

Seems like once again we are hearing from actors that there was a lack of communication from the Prospect Park side, and again, what is sad, and is now the case of One Life to Live as well, they had to shoot an ending based on the show continuing its story online a few days after it airs its finale on ABC.

Bree Williamson takes to Twitter to Clarify "Rumors" that she is Joining GH in a Very Unique Way!

Like with all bad advertising.. the damage is done. Sorry, no more ABC for me, or anything to do with Prospect Park. Yes, if our shows had to be cancelled, the least we deserved was a proper ending… but too late for that !

Because the liars, ABC & Prospect Park, messed up the endings of AMC & OLTL, ABC should give each show 2 hours of airtime, like a T.V. movie, to wrap the stories up. It’s the least they can do after all the grief they caused!