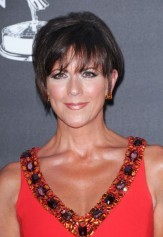 Bravo to Colleen Zenk (Ex-Barbara) of As the World Turns for her fantastic adventure and attempt to get chosen for the new season of ABC’s Dancing with the Stars.  With a monumental grass roots facebook campaign, Zenk got to the attention of the producers and casting director of DWTS. (And hey, might we add, Zenk can dance like nobody’s business)  Unfortunately for fans and for Zenk, her journey to the ballroom dance competition stops here, for now.

Early this morning, Zenk posted on facebook a special note to everyone who supported her efforts. And now for Zenk,  she can turn her attention to garnering a final slot in the Daytime Emmys, as she just received a Pre-Nom for Outstanding Lead Actress!

Zenk stated, “Well here we are at the countdown for DWTS…I have been blown away and overwhelmed by all of the loyal support and love you have shown me in this extremely crazy quest! People from every area of my life have shown up on the pages of FaceBook to join with Team Colleen! I am grateful to all of you. Given their schedule for an announcement, it has become apparent that the Producers of DWTS have made casting decisions for Season 12 that don’t include me….What I have been told is that I “got on their radar” too late in the game. Some of the contestants in previous seasons took several years to book….and many others who have been wanting to dance have waited years to get on the show…and of course, there will be always be some contestants that leave you scratching your head! But, I have danced and performed my whole life and nothing can stop me now. As some of you might know, I have my one-woman show opening on April 8 at Bob Egan’s New Hope. I am so excited about this! I have been working on songs and material since last summer and and this is my “out-of-town” tryout! More tour dates to follow!

So, though I am sad that Season 12 appears not have worked out, I am happy to be free to work on my own show. More important, I am home for my youngest daughter’s last semester of High School…..which was my biggest fear about Season 12…SO….that is where we are now….What you should know, is that every comment or “Like” on-line be it on FB or elsewhere, every Tweet on Twitter, every blog being Blogged is being followed by the producer peeps on DWTS…(Those Team Colleen girls know their stuff)…they are watching all of your tremendous input and support….Have you seen all the DWTS articles that say I am a front-runner??…AWESOME….Thank you, thank you, thank you for this amazing ride you have taken me on. I love you all for it….On to the EMMY’s!!!!!!!!……I am SO EXCITED with my Emmy Pre-Nomination!!!……I was so proud of my work this past year of ATWT!!…..and hopefully this is just the beginning of the EMMY Season for me!! ……all of us at ATWT worked so hard under such difficult times in our “World”, I am thrilled for everyone of us who is on that ballot!!!!!!!!!!!…………Go Oakdale!!!!! In the meantime, before the Nominations are revealed, I hope you will come see me perform “LIVE” in person!!!!…..and when you do, make sure to tell me that you were a part of this FaceBook wild adventure!!!  Love, Colleen xoxo”

VOTE: Daytime Emmy Snub Poll: Who Deserved a Pre-Nom, but didn't get in?

Sorry to hear that she didn’t get the DWTS gig. I love Colleen and I wish they would cast her as Mary Smythe (Greenlee’s mom) on AMC. I know that Anna Stuart played the character before but Colleen would be much more of a powerhorse.

Colleen is one of the classiest, sweetest, amazingly talented human beings on this earth. She deserves more than Emmys or a spot on DWTS. She is an inspiration to not only all performers, but to all people. Continued success and happiness to you Ms. Zenk. Break a leg lady!

I wish all the success in the world to the very, very talented Colleen Zenk. Not only is she a great performer, but she is also a wonderful human being.
Long life to you, dear Colleen !

I’ll join Team Colleen next year because she deserves to shine among the greatest stars !