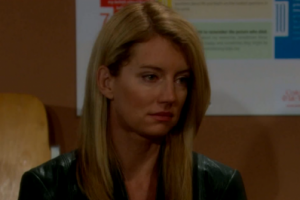 On Friday’s episode of The Young and the Restless, Daytime Emmy winner Cynthia Watros made her debut in the role of Kelly.   In her first scenes, Kelly was already telling her emotional story of how she lost her son, Sam to a grieving support group of other mother and father’s who have lost their children, and are trying to come to terms with it, or finding ways to deal with the tragedy.

Watros as Kelly continues to tell her story, where we learn more about the tragic that the death of her son, who happens to have been the same age as Billy’s daughter Delia when she was killed.  Billy (Billy Miller) and Victoria (Amelia Heinle) have joined the support group to try to figure out what they can do in their own lives to cope with their horrible loss.   Victoria recounts the story of the fateful night that Delia was killed by a hit and run driver to the group and the guilt they both feel.

Kelly later reveals that she and her husband divorced two months ago, because with no one else to blame for the death of Sam, they blamed each other and their marriage went downhill. In these first scenes, it reminded us of just how great an actress Watros is!

Now the questions are:  Is there more to be revealed in Kelly’ story?  Is their an ulterior motive here?  Will Kelly and Billy form a “friendship”?   Is Kelly just a grieving mother searching for answers of how to move on with her life?  Weigh-in!

It’s good to see her back on television.

In one scene, Cynthia Watros moved me more than any of the Y&R regulars have all year, including Steve Burton’s many scenes remembering the war. Talk about talent, when an actress can come in and hook you right from the first moment!

Oh, Beacon! I think you’re my new favorite person in the world! 🙂

Goes without saying, I agree. As much I detest what show-killing witch Jill Farren Phelps and her bloated boy toy Steve Burton have done to this show, I still sat through it just to watch one of the world’s best actors show me her mad acting skills.

“… I still sat through it just to watch one of the world’s best actors show me her mad acting skills.”

she entrances – she emotes unlike no other. perfect descrip… “mad acting SKILLS” she layers upon layers…

two soap fodders if you will:

1. I LOVED HER ON Guiding Light…. Oh, it was maddening.. how much I wanted Annie to WIN BIG… get Josh… and stick it to Reva. OH!!!! The heavens would have shook – hell would have trembled

so much love to Cynthia Watros

2. she deserved that Emmy…. I just wish sometimes… that it would have been Eileen Davidson… for DAYS that year…

So True I felt the same way.

I was reminded on Friday how compelling Cynthia Watros is in her work. It’s as if she was born to do high-drama acting. She draws the audience right in and makes them feel. I’m very glad Y&R chose to use her in a role like Kelly’s. Let’s see where it goes!

Y&R has something here…. BIG time potential to step up to the plate….

offer this lady: Cynthia Watros – your rainy day money – your savings – your cache

stand in line – wait in the wings – Kelly’s ON

Now that Stitch is a permanent character I thought “Annie” might his wife Jenna he mentioned and his son Max was the son “Annie” mentioned dying. It would easy enough to write a back story to explain why Stitch didn’t tell Dylan his son was dead and his marriage fell apart. Just a thought.

She played Annie years ago on another soap

what a great way to further character and story…

this is on FIYAH

I hope she stays on canvas. She is an amazing actress and I have missed watching her on the television

ohh gawd! just another person to watch grieve and cry and put her dark emotions on me,
The death the funeral and a week of grieving would have been enough, this grieving story is overkill .
Anyways Kelly , and her grief and suffering, will take time away from Chelsea and her nagging and repeating the same lines over and over like a parrot, and that will be good 🙂
Looking forward to see Cynthia Watros as Kelly ..

“…will take time away from Chelsea and her nagging and repeating the same lines over and over:

it’s a pity that Chelsea doesn’t know what to do – let alone understand… What Adam is going through… to her credit… perhaps Adam should share his FEAR with… but…. it’s Sharon whom, he should be reeling with…

so… I don’t invest much with the fallout… aside from remaining vigilant for Adam… and vigilant that Y&R won’t be complete, till: Adam and Sharon are re-united and in power!

I am sure Kelly and Billy will have a torid affair. Meanwhile, Victoria will put all her energies back into Newman/Chancellor.

I truly hope not…. for ALL the Billy and Victoria fans… who are fretfully.. waiting for this couple to LOVE each other wholly AGAIN.

depending on how long the story arch is going…

she has all the reason…

lost child
lost husband.. if in fact she knows Stitch

she could exact her revenge

I hope they write a decent storyline for her!

Cynthia is one of my favorite actors of all time! She captivated Y&R fans from scene one. Perhaps JFP will do right by her and the fans for a change by providing a good story arc and keeping this amazing talent on screen. Welcome back Ms. Watros!

yikes! she’s realing on OUR screens

I’ll take her any way I can get some

Cynthia Watros is an amazing actress, but her introduction — such as it was — did little to interest me in her character.

She should have been Nikki’s long lost cult baby, a trashy stripper with an axe to grind with her mama for giving her away all those years ago. THAT would have been a story worth watching.

Lol. I love your wordage…”trashy stripper with an axe to grind”. Lol. Yes that could have been a hoot.

Sometimes I would love to be a fly on the wall in these production meetings just to hear how and who comes up with ideas. “Okay gang. Let’s put on our thinking caps here. We need a blonde…who has lost a daughter…who has been badly damaged by it…who could possibly help Billy and Victoria with their grief.”. Hmmm….well in my way of thinking… they already have that character. Her name is Sharon. Oh wait….they have another character just like that. Her name is traci. Hold up…they have yet a third character named Ashley who fits that bill. I don’t care… Read more »

Ummmm…she wasn’t on that much on Friday, so I’m not quite gushing like the rest of the board. But it’ll be interesting to see where her short term role goes.

Both Miller and Heinle continue to both do some great work.

I’m going to say some things that I’m sure none of you will agree with, but here goes… I’m sorry, but I FF’d those group therapy scenes. As sad/angry as I am about the killing of Delia, the storyline has been dragging on far too long. How many times can ALL the characters, from Billy & Chloe to Adam & Chelsea to every other person on the show, go over and over and over the same conversation? I mean really, most of these characters never even shared a scene with Delia and yet they can’t stop talking about her? And… Read more »

I’m tired of all the drabness and unhappiness on Y&R. Don’t really care to sit through the support group meetings.

Wasn’t impressed at all.

Yes she about had me in tears!

Cynthia is the best ting to happen to the Y& Restless in Years!!