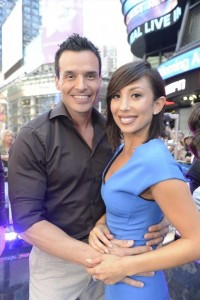 This morning on Good Morning America, the new season of ABC’s Dancing with the Stars celebrity contestants were announced, and as On-Air On-Soaps previously reported former General Hospital, The Bold and the Beautiful, and Melrose Place star, Antonio Sabato Jr. will be dancing in the competition. This morning we learned that Antonio will be paired with two-time Mirror Ball professional dancer, Cheryl Burke!

This season’s cast of celebrity dancers that includes a fashion icon, a YouTube sensation, a NASCAR legend, and a movie star, to name a few will hit the ballroom floor for the first time on live national television with their professional partners during the two-hour season premiere of Dancing with the Stars, which airs Monday night, September 15th (8:00-10:01 p.m., ET).  One couple will be eliminated on the Dancing with the Stars results show the following day, on Tuesday, September 16th (8:00-9:00 p.m., ET).

So, do you think Antonio and Cheryl could be one of the early favorites on paper?  Who do you think has the best shot of winning the Mirror Ball from the dance pairs?  Let us know!

Shemar Moore Talks Malcolm's Entrance In His Return To The Young and the Restless With ET!

I will be watching for Antonio Sabato Jr and Thomas Chong. It would be cool if Richard “Cheech” Marin made an appearance in the audience.

He should. C&C reunited and have recently toured.

I’d want to see how they dance first before i’d pick a favorite…i usually pick before the show starts and then end up liking someone else!!!

Pick Tommy Chong. He will SMOKE the rest of the competition!

To bad Cheech wasnt on the show too…

The show seems be really scrapping the bottom of the celebrity barrel this year for contestants. I know this show can never attract A list celebrities, but there isn’t even one B list celebrity in this group– or perhaps I’m too out of the loop of who’s in these days. Anyway, don’t know how many soap fans will watch just for Antonio, it seems to me you have to be the fan of the show to enjoy it, rather than just watch for one “celebrity” over another. But I wish him well– Derek seems to win most seasons, so Cheryl… Read more »

Mary SF the show is good for all types of reasons. You don’t have to be “A-List” -whatever that means-since you’re not outside the most happening club in the city trying to make it through those velvet ropes. I much prefer watching the whole cast of older celebs than the young up and comers who can two step all over everybody else because their careers and lives are just beginning. Give me the old time “B-Lister’s” any season. It’s great to watch. Even the fake meltdowns.. and you really feel the true ones.

I wasn’t dishing the show, just surprise that this crop of stars are so obscure. I been a loyal and faithful viewer since season one and usually there are few stars fairly well known in their field. I got nothing against the older folks, loved Jennifer Grey, Valerie Harper, Jane Seymour, Susan Lucci, and etc. I was talking more about name recognition that’s all, not cool factor, or who’s in who’s out that type of thing, just people I at least heard of. I never expect them get Brad Pitt just to get a name for the show– because like… Read more »

I agree.. I rarely know anyone on this show.. def will not be watching..

I have to admit, when I read the names of the new cast, I did not recognize most of them! I guess that means I have officially lost my cool factor, as my nephew likes to tell me!

Cheryl is VERY good. Those two could win it all!

Anthony has a good dancer and a good teacher. Cheryl seems to know what her partners strengths are and uses it. I will watch if nothing better is on opposite. But I do not vote because I believe the fix is in. The judges seem to get a lot of ways to nudge in the winners they want !

WOW……ITS GETS HARDER EACH YEAR TO REALLY ATTRACT STARS…. BUT THIS YEAR…???…THINK MANY PEOPLE WILL NOT WATCH AND THEY WILL HAVE THEIR LOWEST RATINGS YET!!!!!

OK…for this upcoming season of DWTS, I want either Alfonso Ribeiro or Lea Thompson to win. As for the rest of them??? Sorry but the rest just don’t interest me at all. Again…sorry.