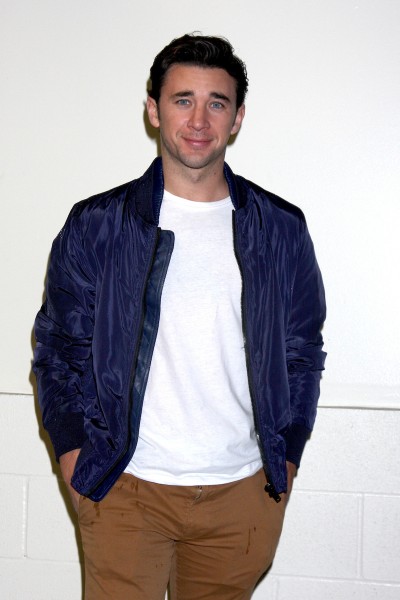 “His bags are packed, he’s ready to go …. leavin’ on a jet plane”, or so the song goes.  But Days of our Lives Billy Flynn will be back very shortly to tape new episodes as Chad DiMera following the long holiday break at the NBC soap opera.  However never one to sit idly by, Flynn during his time off is shooting an exciting new film, as we previously announced, D.O.A. Blood River.

Flynn shared an adorbs photo of his suitcase, with his cat sitting in the middle of it, and expressing: “Leaving tomorrow for Louisiana to start shooting the adventure that is @doabloodriver and my oldest boy Regan isn’t to happy about it…#thestruggleisreal #lovehard #dadwillbehomesoon #catdaddy”

In D.O.A. Blood River, Billy stars along with D. B. Sweeney and Chris Mulkey in a tale inspired by Rudolph Mate’s 1950 noir thriller. In story, the film follows pharmaceutical salesman Sam Collins as he travels from Los Angeles to a small town in Louisiana to sign the business deal of his career with Dr. Alexander, a doctor specializing in Vaccine Research.  However, the outcome is not at all what he expected. D.O.A. Blood River is written and helmed by Stephen C. Sepher.

So, is Billy Flynn well on his way to becoming a name in motion pictures? Are you excited to see how D.O.A Blood River turns out? And, on Days of our Lives, are you enjoying the makings of the Gabi (Camila Banus) and Chad romance?  Comment below!

RATINGS: General Hospital Up In Total Viewers And Key Demos!

Soap World Shares Their Sorrow On The Passing Of Florence Henderson

Love Billy Flynn and will always support his career. I am anxious for his movie and know it will be great! However, as for the storyline between Chad and Gabi on Days….that truly makes me sick on every level. Can’t wait for Days to put the best pair back together which of course is Chad and Abby. I truly believe they belong together. The thought of him with anyone else on the show makes me all kinds of sick. So Days and/or Dena, please give the fans what they want. That would be Chabby.

The storyline could take a even more sickening turn, Lora. JJ will discover Abby hiding in the attic. He’ll probably keep her secret… Jennifer could have a relapse from the pressure of keeping Abby’s secret, causing her to pop pills again. Her mind could turn to mush. She can become paranoid that JJ could spill the beans about Abby or arrest Jennifer for dope. To prevent that from happening, Jennifer can lock JJ in the attic with Abby. Jennifer can observe Chad and Gabi getting closer and closer and update the siblings of the progression of the Chabi relationship. Jennifer’s… Read more »

That’s crazy! If the story goes that way like, Flowers in the Attic, baby born incest, I’ll STOP watching Days.Ok!

Haha!! Sounds made to order for Dena, doesn’t it?

Greg Vaughan’ Eric … returns… when? will they pair him with Jenny Bear

and continue the partay… with favors ? they oughta

DAYS should continue where they left off

Greg Vaughan and Melissa Reeves are gamers… give them some meaty

ps: I’ll be surprised if you read the series: V.C. Andrews.. “flowers in the attic” I thought the first two books were good.

Love Billy Flynn, I am excited for his opportunity to film a movie. Love him as Chad Dimera on Day’s.

Love you, Billy….awaiting your return with bated breath. Happy filming!!!!!! Must watch. Ciao.

I like chad and abby best . chad and gABY its ok

NOOOO! to Chad and Gabi. Still mad at the story line that ended what Chad and Abigail had going……………. Why did the actor playing Abby change? Liked the original one better.

Great for him but PLEASE don’t leave DOOL!!!!!!

I am very happy for Billy Flynn, he is a great actor, but I do not want him to leave Days of Our Lives, and he needs to get back with Abby, I don’t like him with Gabi. Put JJ and Gabi back together and Chad back with Abby. Good luck Billy in your new movie!

i’m with you… selfishly… all productions need to give them “outs” to fly. JUST KNOW WHERE YOUR HOME is…. with us. I just read somewhere… that DAYS has gone black… for a couple months. November 16, 2016 through January 16, 2017. it’s said they have 7 months of REEL in the can… and this two month stretch… will bring that down to 5 months. what can we do… ??? sigh. DAYS has been good again I haven’t seen Abs and Chad together… and it will happen… but .. it’s a wonder… that NEW ABS has chemistry with Melissa Reeves… that’s… Read more »

I was referring to the 1987 film, ‘Flowers in the Attic’, Patrick. As for GV’s return, I believe he’ll be onscreen as Eric starting in February. Eric could reconnect with Jennifer, but I’m still predicting Chloe is having Ericole’s baby!

Congrats to him but this week I have seen AMC’s alumni, the new 90610 blond actress and etc. It appears that Hallmark has taken over Lifetime’s job of hiring formal Soap stars and many of the movies have substance.

Abigail is weird if me out behaving like she still has issues. I’m not ready to wish her on Chad and Thomas in her current state. He’s been through enough. It’s time for love and happiness.

Weirding me out. Forgive my auto-correct

I,m very happy for Billy. He is agreat actor. I will be looking foreward to him coming back .I also would like to see his movie. Good luck to you Billy

Why is it ridiculous for Billy Flynn to do a movie, Linda, or was your comment meant to be in reply to mine?

If it was geared towards me, then that’s OK. I think it’s ridiculous too, but I was just pointing out how much worse things could turn out. I’m not hoping for a storyline like that and I don’t think DAYS is going there, but one never knows…

Gabi and Chad don’t fit and (whisper her lines so nobody understands what she is saying) Hope and Rafael don’t either. Get rid of the new abby and at the same time ciara. The outcome will be a happy community in Sillysalem.

I couldn’t be happier for Billy Flynn. “Go their” exercise your acting chops

you have such a finesse.. an old skool charm… a serial dream

this is your job to keep

Leading Man status is huge… the DiMera Mystique Lives ON