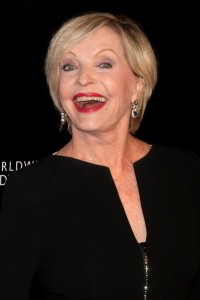 The entertainment world is a little less brighter today following the news on Thanksgiving evening that America’s mom Florence Henderson, best known and beloved for her role as Carol Brady on the 70’s sitcom, The Brady Bunch, had passed away at age 82.

Henderson died of heart failure at Cedar-Sinai Medical Center in Los Angeles surrounded by her children and loved ones.  Her manager, Kayla Pressman said that her death was unexpected.  Henderson had not been sick and earlier this week, she attended a taping of ABC’s Dancing with the Stars to cheer on Maureen McCormick, who played her TV daughter Marcia Brady.

For decades and revivals of The Brady Bunch, she was the mom we all wished we had, and even Florence herself had noted on a TV interview: “I created the kind of mother that I wished I’d had, and I think everyone longs for.”  Florence’s enduring career started with her first big break in 1951 when she was offered a starring role in the musical Oklahoma!  Her voice carried her to a successful Broadway career, and eventually she began landing high-profile television gigs. In 1959 she was on set as the first NBC “Today Girl”, and in 1962, she became the first woman to guest host the Tonight Show.

Over the last 24 hours, the soap opera world has been shocked and saddened with the news of Henderson’s passing.  Here are a just a sampling of some of the stars and more who took to social media to share their grief.

B&B’s Sean Kanan (Deacon): “Florence Henderson helped raise my generation. When I finally met her she was such a warm person. She will be so missed.”

OLTL’s Robin Strasser (Ex-Dorian): “Florence Henderson Was at ‘DWTS’ Days Before She Died  …A true hottie-She didn’t “sit it out” Brava RIP”

NATAS (Daytime Emmys): “NATAS would like to extend our condolences to the family of Florence Henderson. We have lost one of the truly great entertainers. From Broadway to films and Daytime to Primetime, Florence was not only America’s Favorite TV Mom, but television royalty as the first Today Show Girl on NBC to her own Daytime talk show and, of course, the iconic role of Mrs. Brady on The Brady Bunch as well as being one of the first women to have her career recognized by The Smithsonian in DC as a ‘Legendary Lady of Stage and Screen.’ Florence will miss you tremendously!”

Susan Olsen (Guest starred on Y&R and played Cindy Brady on The Brady Bunch): “Of course we are all devastated by the loss of our TV Mom, but four magnificent human beings are proof that Florence was a wonderful mother in real life. It is for them that my heart is aching.”

Knots Landing’s Donna Mills (Ex-Abby): “Today we lost one of my most favorite people and closest friends. You were such a fiery light in my life and you will be so greatly missed. Forever in our hearts rest peacefully dear Flo.”

On-Air On-Soaps heart goes out to all of Florence’s family, and in particular, her wonderful daughter, Barbara Chase, who all of us in daytime have had the pleasure of knowing and working with in her position at the Television Academy.

Now, share your condolences, remembrances and thoughts on the passing of Florence Henderson in the comment section below.

THE YOUNG AND THE RESTLESS: Victoria Accepts Travis' Marriage Proposal, But Is Villy The End Game?

It’s very sad and shocking. I just saw her in the DWTS audience.

Years ago, in a special edition of “Soap Opera Digest,” I read that Florence Henderson had been a fan of “Days of Our Lives.”

Florence and Bill Hayes (Doug Williams, DAYS) were billed as “The Singing Sweethearts” in singing tours. Their partnership began with a series of Oldsmobile commercials. Here is one commercial:

4ever DAYS…loved your link. What a classic find, ( the jingle aka The Music Man…so you say you got trouble…) thanks!

This is such sad news, especially to everyone old enough to remember when “The Brady Bunch” was on ABC every Friday night. It is sad to think we just recently saw her in the audience of “Dancing With the Stars,” looking beautiful as ever. There have been so many celebrity deaths (Bowie, Prince, Leonard Cohen, Natalie Cole) and ones that impact the soap world (Claire Labine, Agnes Nixon, Larkin Malloy).

Wow this is so sad, Florence was a classy sassy lady. Loved her on the Brady Bunch. RIP my dear lady.

Florence Henderson was an icon, may she rest in peace.

I always admired how energetic and alive she was well into her 80s. So sad to hear this news.

So sad to hear she passed away, awesome lady, I saw her in Illinois @ one of her outings, she was a breath of fresh air, couldn’t go a week without watching her on Brady Bunch, what a great mom she was on the show, will miss her smiling face, prayers to her family

Beautiful, hard-working, faith-based (which she shared in her memoir), joyfully talented, she seemed as if she’d be with us forever–her vibrant nurturing spirit surrounds us, always. #LovelyLady

I’m sad but she will live on forever as carol Brady and people will discover that show and love her as their fave tv mom and how great is that?

OH, MY GOD!!!!! I am VERY, VERY SHOCKED AND EVEN MORE SADDENED by the sudden death of Florence Henderson!!!!! She was such an A+ CLASS ACT ALL THE WAY!!!!! I was such a BIG FAN of Miss Florence. You will be TRULY MISSED, Miss Florence. Rest In Peace.

Like many people I was shocked to hear of Florence Henderson’s passing. She was such a youthful, pretty woman and so very alive! Saddened to hear it…I can see her smiling face/apple cheeks…

Our beloved TV mom is gone. Who will remind us not to play ball in the house? Bless the Henderson family.

Florence Henderson’s life truly was “the story of a lovely lady!” She will be missed….

My generation lost one of the best TV moms one could ever hope for – RIP, Ms. Henderson and thank you.

Ms. Henderson should have been a bigger celebrity. She had more talent than most. The early 50s Florence was chosen lead in “Oklahoma ‘ the musical by great Rogers and Hammerstein. Her voice was operatic but also comical and theatrical. God bless you and your family.

I hope they dim the theater lights on Broadway for her soon.