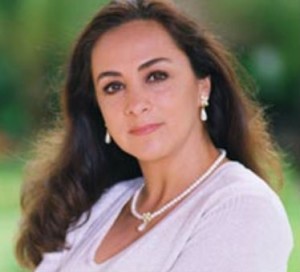 Days of our Lives viewers caught last week that Eduardo Hernandez (A Martinez) made mention that his wife’s name was “Adriana”.  And since actress Alma Delfina has joined the cast of the NBC daytime drama series, it appears she will be playing the matriach of the Hernandez family matriarch an the mother of Rafe (Galen Gering), Gabi (Camila Banus), and Dario, who is reportedly and been rumored to being played by Jordi Vilasuso, although this has not been officially confirmed by the show.

Since DAYS so far ahead, viewers can expect her arrival in March.   The Mexican-born actress has hadmuch success in the telenovela genre in the 70’s and 80’s, and again from 2004-2015, but she is new to the world of American daytime drama.

However, Alma is no stranger to American primetime TV having had guest stints on dramatic series including: ER, CSI: Miami,  The Division, and Skins.

Delfina becomes the second telenovela star to join the cast in Salem following Ximena Duque, who will be joining the cast in March for a special guest arc.

So, are you glad to know DAYS is building up the Hernandez family to become what looks to be a core family of Salem? What do you think of the casting of Alma Delfina in the role? Share your thoughts in the comment section below.

Great news. I love the Hernandez family, and Rafe is my favorite character. I’ve been hoping to see his mom for a while. I’m sure she’ll be fantastic in the role.

I hope she’s against Rafe and Hope… THIS could be “real” good… she looks like a strong matriarchal person ! whew! which , if she’s a good actor… could be so good for and stand up to, both Rafe and Eduardo!

so… who knows… I don’t mind that the Hernandez could be a focal point… as in a “finally” family of color !

NOW : if only they’d feature a little bit of Tori… for Paul

Paul : I miss you

I hope she can act her socks off

That is exactly what I have been saying, Patrick. We do think alike. Hope cannot bear him any children.

Eddie’s story is boring to me. Maybe if they stopped the focus on the hitman stuff I would enjoy him more. And it would have been nice to have wives #1 and #2 meet, but Eve is gone.

Eddie and Eve should of revisted their romance…then wife no1 shows up hoping to get him back much to Rafes chagrin…then there could be a story that maybe Paige had a twin sister…Eve sees a young woman who looks exactly like her dead daughter-is she Paige’s twin or someone wife no1 hired to drive Eve insane!…many drama possibilities thrown out the door.

god the dynamics would have been intense and a seriously major coop had DAYS just : REHIRE Kassie DePaiva

all the shenanigans Eve could have pulled… out all the stops

Eduardo is just revving up… and layering his character with all that he knows in Salem….

Mother Adriana will throw everything in upheaval

I agree completely, he’s a dull character, the whole show needs a change of focus – right now it bores be to tears. I almost watch the show right now for obligatory reasons, waiting for it to end so I can watch something else. If either One Life to Live or All My Children were around, I wouldn’t currently be even watching this show. In the past I have enjoyed storylines such as Sonny and Will (with Paul thrown it for complications) and of course Crazy Ben and Abigail – and I enjoyed Sami with EJ – and Eve having… Read more »

In response to your reply, Jim, I can’t reveal my sources or further details. I’m sure Michael Fairman Soaps will be reporting on the subject(s) soon.

Yes, M. Eddie is not doing it for me either. Boriiiiing!!!!

Wow, so Jordi is a Dario recast? I can’t imagine the Dario we met returns as someone who somehow added a few pounds of muscle.

Too bad he won’t cross paths with Melanie soon.

Could we just have Kassie DePaiva back instead???

Was going to say the same thing!

Sure now they bring Rafe and Gabi’s mother onto the canvas after her granddaughter’s gay father is out of the picture. The mother was always referred to as being extremely Catholic and religious – so it will be interesting now that the writers who killed Will off are bringing on the mother I wonder if they will ever bring that issue up, or if the whole thing will be swept under the proverbial rug since the gay father is out of the picture. It is like poor Will never existed. Don’t get me wrong, I am looking forward to the… Read more »

You may still get your wish, Mary…Freddie Smith has returned and Chandler Massey is rumored to have returned.

I have not been able to find those rumours…where did you hear this?

oh look, another new character…just what Days needs….NOT!!!!!! Guess there won’t be any storylines for existing characters anytime soon, like Lucas and Adrienne…just this boring “love” story with Hope and Rafe…..hate to say it, but GH is slowly becoming the show to watch…..and Days was good there for a nanosecond….oh well, maybe on the 51st anniversary….if it sticks around that long….get back to fresh stories that involve characters we love…..PLEASE!!!!!!

Um…Jordi Vilasuso as Dario?? Maybe 20 years ago!! Days is weird. Killing off Brady’s and Horton’s left right and centre. And expanding the Hernandez clan. What? It’s called Market Research people!!!

Not to mention letting the talent that is Kassie DePaiva go!

Glad they are bringing on Rafe’s mother and family. I like when they have the show around family. It strengthens the storylines, relationships, and bonds. They have the Brady’s, the Horton’s, the Dimera’s, the Kiriakis families, so time for the Hernandez. They should strengthen Abe’s family and have a black family as well. Bring back a gay family also. The show needs to be more diverse.

For me there will be too MANY Hernandez family members while others were throw away from existing Days families.

So much for the promises of these writers to respect history and character integrity. So far, they are throwing out characters, trying to ruin loved characters and propping newbies.

Promises made and broken rather quickly! Not amused