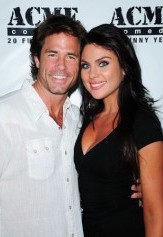 Days of our Lives and Venice star, Nadia Bjorlin, was the guest host last night at ACME Saturday Night, the famed L.A. based sketch comedy, SNL-type live show.  DAYS castmates, Shawn Christian, Judi Evans, Molly Burnett, Mark Hapka, Lindsay Hartley, and hubby, Justin Hartley, and Casey Deidrick were all in attendance to show support and laugh out loud to Nadia’s hilarious comedy turn.  In fact, perhaps the best night of the line was during her opening monologue in which Bjorlin was telling the audience no one thought she was funny, so much so that a friend asked, “Have you ever done comedy?”  in which she responded, “Have you ever seen Days of our Lives?”

Nadia’s beau, B&B’s Brandon Beemer, was also on hand to support his gal, but also makes a surprise cameo in the show.  In addition, Y&R star, Christian LeBlanc,who will be the next star to host ACME Saturday Night on August 28th, was in the audience to applaud Bjorlin.

You can watch the video of the full new ACME Saturday night show featuring Bjorlin, right after the jump!