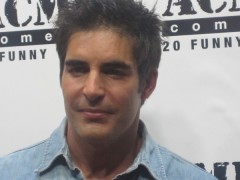 Over the weekend on Saturday night, Days of our Lives and Venice star, Galen Gering was the guest host of the SNL-type sketch comedy show, ACME Saturday Night in Los Angeles!

Performing in front of a live audience which included many soap favorites including: The Young and the Restless, Michelle Stafford (Phyllis), DAYS and Venice star, Nadia Bjorlin, B&B’s Brandon Beemer, DAYS returning Patrick Muldoon (Austin), One Life to Live’s lovebirds, John-Paul Lavoisier and Farah Fath (Rex and Gigi) as well as Terri Ivens (Ex-Simone AMC), needless to say, it was a fun crowd.

On-Air On-Soaps was also in attendance and we can tell you that the show was hysterically funny.  Galen did a fantastic job with all the material and showed his great comedy timing and sensibilities throughout.  We won’t spoil the sketches for you, because you can now watch the full show streamed online by clicking here!

We caught up with Galen last night at the Venice season three kick-off and got some comments from the actor on his ACME performance.  Gering happily explained, “Doing the ACME show was one of the most fun things I have done in my life as an actor, as was season one of Venice, for the record.  And I think anytime you “pop your cherry” if you will, it’s exciting!  Season one of Venice was like that for me, but being on stage last night and doing the comedy with these really great scripts was an absolute blast.”

So, how does the the comedy troupe and the guest host go about determining what sketches they will perform in? Galen gave us the insight scoop.  “Here is what happens: you got into a pitch meeting and all the actors in the troupe have written scripts. You are handed basically like ten or twelve scripts. And you sit at a table with all the actors, the producer and director, and you do a cold read of the scripts. After that, you go with the producer and director privately and pick the ones you want to do.   And I was not opposed to any of them, or found any offensive. It was hard to pick then not to pick, if you know what I mean.   So what I tried to do was pick ones that had a variety and were challenging and fun.

Throughout the week I was given one script which I did not pick that I went to myself later, ‘Oh shoot. Should I have picked this?’ But ultimately, I think I made the right choices. We shot a very funny short film on Thursday night. But there was another short film that was hilarious and more complex but we did not have time to shoot it.  I can’t wait to go back and do ACME Saturday night again.”

Since many soapy notables were in attendance we had to ask, how did it go over with his toughest critics…other actors and his wife?  Galen smiled and said, “My wife, Jenna and my friends were so excited for me and they loved the show. I was at Michelle Stafford’s today.  She was over the moon and told me how funny it was.  It is something I love to do and have been attracted to doing.  ‘Knock on wood’, I have been able to be on soaps for ten years or so and that work is demanding.  But I would definitely like to attack the comedy more and be pro-active in that realm, because it is so fun. ”

Now that playing a doppelganger had come to an end on DAYS for Gering (given his immense love of playing comedy) perhaps saying goodbye to Rafe2 was sort of bittersweet?  Gering said that was kind of true!  “Playing Rafe2 as an actor was great and super challenging.  Some days were like beyond, where I would go, ‘My God.  How am I going to get through this day?’ The pace we moved at was astounding, and in that regard it’s nice to have a respite.  But as far as not having that comedic outlet and the ability to be a badass if you will, and not be held accountable for my behavior, that has always been really fun as an actor and to do something totally different. And with that said, it was also nice to be back doing the romantic storylines with Sami and Alison Sweeney (Sami) and the fun comedy of it. I can honestly say that has been refreshing as well.  It’s been all good.”

Galen show was totally awesome at Acme Saturday night.
I never laughed so hard in my life. He did a awesome job. It was also great surprise meeting the other stars along with you.

I only got to watch on line-but Galen was hilarious! The funniest skits were the “I’m so hott” and “People Magazine’s 50 Most Beautiful People”. I was laughing out loud at those for sure! Galen has a great talent for comedy. I hope he does get to do it again–he seems to love it and I love watching!

I went and Galen was awesome not to mention he is one yummy man! Really good actor. Totally believable in every scene.