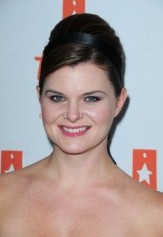 Here is a spoiler alert out today from TV Guide! So, if you don’t want to know, don’t read any further.  In a new interview with Three time Daytime Emmy winner, Heather Tom of The Bold and the Beautiful it is revealed that on the August 1st episode of the series,  Katie will suffer a heart attack upon learning that hubby, Bill wants out of their marriage to be with Steffy!

As viewers know, Katie is a heart transplant recipient in a major previous storyline where she is alive due to brother Storm’s heart.  So now, thanks to the bombshell of what is going down between Steffy and Dollar Bill Spencer, the future seems to be quite an uphill battle for the beleaguered Katie.

Below are a few interesting excerpts to get to the heart of matter from the interview with Heather!

Heather on how the heart attack begins for Katie: “Taylor comes over and says, “Listen, your husband and my daughter are involved.” And Katie’s, like, “Your daughter is sick and needs help. She’s obsessed with my husband and she’s living in a fantasy world!” But it’s at that point that a seed of doubt is planted, since Taylor is not the type to make stuff up. Then when Bill comes in I have this two-page monologue where Katie tells him what Taylor said and through it all Bill says nothing. It becomes clearer and clearer that things are not the way Katie thinks they are.”

Heather on if the story takes a turn where Bill then stay with Katie out of guilt for her heart attack: “I love that Katie is not being written as the pathetic victim here — her confrontation with Bill is very raw, physical and ugly. She does not want him staying with her out of obligation or guilt over this heart attack. She says, “If this is who you are, then I don’t want you!” [Laughs] It’s really pretty great. It’s some of the best material I’ve ever had.”

Heather needs to come back to Y&R and show the real Vikki Newman Abbott – the current portrayal is a shell of what Heather Tom had protrayed. She is a lifeless wimp and Billy deserves better

Awww, I feel bad for Katie, Bill is such an idiot how could he leave Katie for that ugly troll.. I hope Katie stays true to herself and not take that idiot back when he realizes Steffi is a horrible person.

I don’t care for none of the Logan’s and this heart attact does not make me feel sorry for Katie. I was glad that Dollar Bill realize that he was in love with Steffy, and for them to put a stop to their relationship now is stupid.