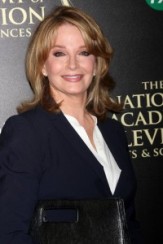 Daytime icon Deidre Hall (Marlena) celebrated her 40th anniversary on Days of our Lives yesterday on June 21, 2016, even though it has been noted she took some years off from the show. Hall had premiered on the NBC daytime drama series on that date back in 1976, as the beautiful and caring psychiatrist in Salem, Dr. Marlena Evans.

When viewers first saw Marlena on the canvas, she was the psychiatrist that treated Mickey Horton (John Clarke) in a sanitarium. As fans of Deidre’s and the character of Marlena know, the past forty years have provided many an adventure, mystery and romance for “doc”.

From the Salem Stalker, to Marlena’s possession, to exploring the ramifications for a mother following SIDS death, to her back-from-the-dead story, to her countless romantic entaglements with Roman and John, to being the understanding  grandmother who helped her grandson Will come to terms with his sexuality, Hall’s Marlena has often been the moral center and an everywoman centerpiece of the 51-year-old soap.

In celebration of her 40th milestone yesterday, Deidre took to her official facebook page to show the fun and humorous side of playing Marlena, when she called attention to a fantastic fan video made in 2014, entitled, “Marlena Evans Gives You Hell.”  This such a whimiscal, fun, and engaging look at the character that we wanted to repost it here.

So, check out the video containing memorable Marlena moments after the jump, and then share your thoughts on 40 years of Deidre on DAYS in the comment section below!

Very cute video! I’ve loved & watched Doc since 1981 and thanks to old footage seen her older stuff. Glad to see Wayne at the end of this video. Happy Anniversary Dee!

i seen her from her first episode…wish this included first husband Don, sister Samantha and stepdaughter Donna…

Great song set to a very good montage of clips with our favorite Doc—we know she ain’t no “All American Reject”.

I loved Marlena’s/Deidre’s “The Wizard of Oz” type scene in the church!

I always thought Dr. Marlena Evans was one of the best characters on daytime. Deidre Hall is beautiful and classy, and it is a downright shame that Daytime Emmys have never awarded her Best Actress for her outstanding performances.

Deidre Hall is absolutely stunning and talented and yes-should be nominated for a Daytime Emmy.

She is still so gorgeous

Miss Evans is a class act. DAYS should always keep its focus on its legacy characters. They are the tent poles. This video was a delight to view and on such a special occasion. 40 years! Congratulations!

What a kick in the pants I have not watched Days in a decade but Deidree Hall made that soap! Best to you my lovely lady! You were the best of Days lots of great memories!