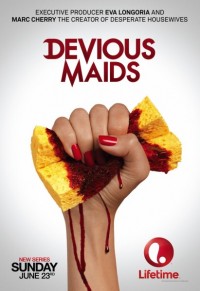 Score on for Lifetime, who picked up on the pilot of Desperate Housewives’ Marc Cherry of Devious Maids after ABC Television Network eventually decided not to move forward with it!

Today, the cable network renewed Devious Maids from ABC Studios for a second season and 13 all-new episodes in 2014, meaning All My Children’s former star, Susan Lucci will be back filming another season of this soapy dramedy! Current AMC star, Paula Garces has played the killed-off devious maid in season one!

Since its premiere on June 23, nearly 23 million viewers have watched Devious Maids on Lifetime. It is the network’s fastest-growing drama ever, and has catapulted Lifetime to cable’s number one network in the Sunday 10:00pm ET/PT time slot among Women. Its 18% Hispanic composition nearly doubles Lifetime’s primetime average.

“One of the most daring series on television, Devious Maids has quickly become a hit,” Lifetime exec vp and GM Rob Sharenow said of the drama, from ABC Studios, Televisa USA and exec producers Eva Longoria and Sabrina Wind. “ABC Studios has had a great partnership with Lifetime and Televisa and we’re looking forward to another terrific season with Marc Cherry and his talented cast and crew,” said Stephanie Leifer, Senior Vice President, Current Programming, ABC Studios.

Devious Maids revolves around a group of maids (Ana Ortiz, Dania Ramirez, Roselyn Sanchez, Edy Ganem and Judy Reyes) who are bonded by their jobs, struggles and employers’ “upstairs-downstairs” universe.

So what do you think of the renewal of Devious Maids?  Is it one of your favorite new shows? Do you think now that Maids’ will be back in action, Susan Lucci is less apt to join All My Children and reprise her role of Erica Kane? Or, do you think she will still work something out to return?  Weigh-in!

Y&R Casting Younger Leading Role of Ally! What Are Your Casting Suggestions?

Great news, love this show. But, this tells me that Client List is NOT coming back. If they have already renewed DM, & still no word about Client List, & one of the main actors got another show, does not look good.. JLH must really be sticking to her guns about having her baby daddy deep into the show.

I wouldn’t give up hope for The Client List. Since Jennifer Love Hewitt is pregnant; the show won’t be able to resume production in the immediate future. They may be waiting to hear how much involvement she’ll want to have after having the baby.

I love the show. susan lucci is a very busy lady. good for her. she is a wonderful actress. hopefully susan can make guest appearences on all my children.

love this show ! so glad it’s coming back for a second season.

I am very happy about this! It’s a great show with great actors and storylines.

Very glad to see it has been renewed – still think SL will show up, even if only for an episode or two at a time, on AMC

I am totally hooked and happy it will be back again. Love these ladies!

Devious Maids is Awesome and I love it! I DVR it and watch it as soon as I can. Susan Lucci is brillant! If you haven’t tuned in, you’re missing a treasure. I am very excited for the season finale and season two! Go Girls!

This is truly horrid bec this is probably 1 of the most racist dramas. Telenovela remake only cast latin american actresses as the help. While majority white actors were cast as their rich employers. Yet telenovela had the help and their employers portrayed by latin american actors. Of course hollywood kept all of the help as latin americans but made the rich chars majority white bec tolerant hollywood obviously wouldn’t be comfortable w/ a white maid cast member serving a racial minority char. Shows like this only encourage more racism towards latin americans. What makes devious worse is that its… Read more »

This is a fun show that let’s you forget the stresses of every day life. It isn’t meant to be a political statement good or bad or some revolutionary show that will solve world peace. The issues of racism and stereotypes is not necessary. It is entertainment. Sadly, the public – not just Latinos may not be supporting it enough. It looks like it may be cancelled but I am hoping that someone can save it. It is so much fun. Guilty pleasure. As for Susan Lucci, All My Children is gone yet again. I do think she would have… Read more »

I love the show. Can’t wait for it to start again. Why do we have to wait so long tosee the show. What about the Client List? Any news on that???