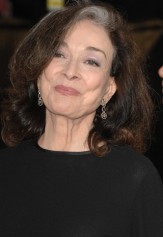 Actress Dixie Carter, 70, who most memorably portrayed Southern interior designer Julia Sugarbaker on the sitcom Designing Women from 1986 to 1993, died Saturday morning, her publicist confirmed to EW.com. “This has been a terrible blow to our family,” Carter’s husband, actor Hal Holbrook, told Entertainment Tonight. “We would appreciate everyone understanding that this is a private family tragedy.” Carter is survived by Holbrook, her husband of nearly 26 years, and two daughters from a previous marriage.

Soap fans remember her for her unbelievable performance as Brandy Henderson on Edge of Night who was a spoiler for the Nicole and Adam super couple.

Carter, who was born in McLemoresville, Tenn., started her acting career in a 1960 stage production of Carousel.  In fact, after an eight-year hiatus from acting, she returned when she filled in for actress Nancy Pinkerton as Dorian on One Life to Live, while Pinkerton was on maternity leave. She subsequently was cast in the role of Assistant D.A. Olivia Brandeis “Brandy” Henderson on Edge of Night, which she appeared from 1974-76. (She went along with the show when it switched from CBS to ABC.) Carter took the role even though some advised her that doing a daytime soap might negatively affect her career. However, it was with this role that Carter was first noticed, and after leaving Edge of Night in 1976, she relocated from New York to Los Angeles, and pursued prime time television roles.

One Life's Original Dorian, Nancy Pinkerton has passed away