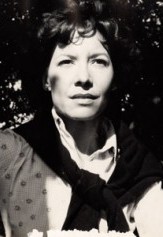 In more news of sad and shocking deaths over the weekend, of greats in the soap world, Nancy Pinkerton Peabody, the original Dorian Cramer Lord of One Life to Live has passed away at 69.   Apparently the actress had died on March 4th, and her body has since been cremated.  A memorial is set for May.  This comes on the heels of  the news from earlier this past weekend, when the soap world learned that Designing Women’s Dixie Carter, former star of Edge of Night and one time replacement for Pinkerton as Dorian on OLTL ( =while Pinkerton was on maternity leave) also passed away.

Pinkerton Peabody was 69.  Doctors had describer her passing as “heart failure”  When she left acting, Nancy turned  to photography. In the late and in the 1980s, she produced an extensive exhibit titled “Love in the Time of AIDS.” It depicted and promoted volunteerism in response to the then-rampant AIDS epidemic. The exhibit was displayed on the north-facing wall of the Cathedral of St. John the Divine in New York City.

Pinkerton’s, Dorian is so remembered on One Life for her classic battles with Viki (Erika Slezak), her lust for Joe Reilly (Lee Patterson), and her fling with Mark Toland (Tommy Lee Jones).

Here is a clip of Nancy in action as the first Dorian!

GH's Bradford Anderson ties the knot over the weekend!

Dixie Carter has passed away. Start in Soaps helped her legendary career!

I loved Nancy Pinkerton as Dorien. When I attended my first soap opera gathering in NYC I actually got to meet her. She was lovely. Just learned of her demise and am truly sorry to hear of it. May she REST IN PEACE. love her forever.

I’m happy to have OLTL back…even if not on TV! I started thinking about the “good ‘old days” from the very beginning, so I looked up some of the original cast members. I’m sorry to hear about Nancy’s passing. Her portrayal of Dorian is one of the reasons I got ‘hooked” in the first place! May her memory be eternal <3