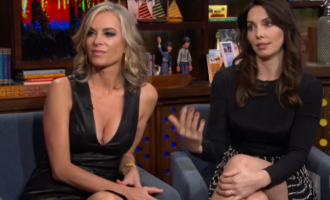 On Tuesdays night episode of Bravo’s hit talk show Watch What Happens Live!, host Andy Cohen welcomed RHOBH cast member and Y&R and Days star, Eileen Davidson and Whitney Cummings to the show, with none other than the just exited Tobias of Jabot Cosmetics, Jeffrey Christopher Todd as the guest bartender!

There were two clips from the show of interest: In the first Eileen, upon a viewers call-in question, revealed as had been documented by other daytime performers, that the decadent 80’s were just that behind the scenes of the soap operas, with cocaine  use, making out or sex in the dressing rooms, and alcohol actually in the cups or glasses they would drink on set during scenes.

In the second clip the After The Show segment:  Eileen, Whitney, and Andy discuss social media and the pushback Brandi Granville has gotten this season on The Real Housewives of Beverly Hills!  Remember, it is she who threw the drink in Eileen’s face.  The trio also discuss social media comments the actors on the soaps receive, as opposed to people who are being their real life selves, although edited, in reality programming.

Watch the clip with Eileen’s comments on sex, drugs, and rock and roll in the soaps in the 80’s. And then, weigh-in on how we comment on celebrities or real life people on social media.

IMO…the 80s was the last great decade for most soaps…

Its so great to see Eileen back on Y&R. Sharon , Eileen , Drucilla, Jill and some others are my favorites. I wish Victor would stop being on so much. Chelsea is so boring. The new Billy please recast him. But all in all been a fan since 1981 🙂 Oh and Summer oh that dear girl is so much like her crazy mother Phyllis we know where she will end up . Like mom

Genie Francis spoke about the drug use on the set of General Hospital when she was younger. Tony Geary confirmed what she said on an episode of Lifetime’s “Intimate Portrait” years ago-so this does not surprise me. Soaps in the 80’s were all about big budget and decadence-it seems. I had the displeasure of tuning into RHOBH the other night-the episode in which Eileen had the girls over to play cards with her husband. (Her house is gorgeous by the way). Eileen was a class-act, as was Lisa Rinna. The other women are just awful-hard to watch. They give women… Read more »

Yes, she earned $750,000 for the season. One could put up with a lot of craziness for that kind of money!

I just watched that epi. I feel bad for Vince & Eileen inviting this insanity into their home.

Ahh the eighties—-the last decade we were allowed to have fun without everybody finding out about it on the internet—those were the days. LOL

I just love ED. I had not watched any of the RHoWhever franchises until she and Lisa Rinna joined the RHoBH. Now it is my guilty pleasure. Both Eileen & Lisa are a hoot and surprisingly, often the voice of reason.

I thought Eileen was telling tales out of school.

She didn’t name names and the stories about the sex and drugs have been around for years. To an extent, it still may be happening today.

They should call the show;
Hollywood Ho’s and Glitter ..

ahhaa alcoholic woman made of plastic surgery, silicone and botox wearing glitter trying not to look like senior citizens..
I would hope those restaurants they hang in give them their senior citizen meal discounts ahaa..

You nailed it.
Ridiculous and very sad, too.

I would think you’d love it Su! LOL. You seem to love all the characters on GH that are made out of rubber, and masks, and silicone, and otherwise surgically altered. Half the characters on the show are or have been…Julian, Jason, Luke, Faison, Duke, Obrecht, Anna, etc. What makes this different? Its all “”just entertainment” as you keep reminding us ad nauseum. Do you suppose Carlivati has the ability to tell a story WITHOUT the use of.masks, plastic surgery, altered faces, dopplegangers, etc?

Eileen is a great actress but I lost some respect for her for being on the Housewives. She is way better than most of the plastic trash that call themselves “Wives!”

Hey, Timmm.
I have never watched one single episode of any of this trash. I will never understand why these women demean themselves so. And, for Eileen Davidson to lower herself like this? Pity.

Well, then, Tim…I am getting older along with you. I have too much respect for myself to even contemplate what this (collectively speaking) poor excuse for humanity will do next.