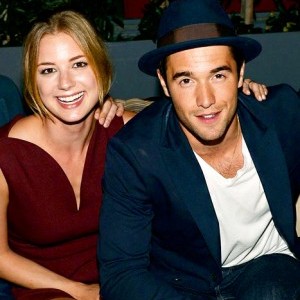 This month’s Canadian cover girl of Elle Canada, and Canadian born herself, Revenge star Emily VanCamp (Emily). spoke on the record about her real life romance with her co-star Josh Bowman (Daniel).  For those in the know, the duo have been dating for the last two years, although they rarely speak about their relationship in interviews.

However in Elle Canada, VanCamp offered up this comment on her off-screen romance with the man who on-screen shot her twice: “Josh and I keep it all very separate.  I barely talk about him in interviews, to be honest. It’s just really funny in the moments when we’re playing these absolutely absurd things. I call him ‘wife-beater Daniel.’ It’s hard for my family to watch—it’s also hard for them to see me in that light. But we’re actors. None of that lives in any of us. Thank God!”

And as far as playing her emotional alter-ego, who currently is having brain blackouts, Emily reveals:  “I’ve always been very good at letting my characters go at the end of the day.  For almost three years now, I’ve been playing with these heightened emotions, someone who’s so much more tortured than I could ever be, with so much more anger than I could ever have.  At a certain point, it does start to weigh on you physically and mentally, and suddenly you’re not coping with things as well. I think it’s emotional exhaustion. It’s definitely something I’m trying to catch and change as much as possible when I really feel that it’s getting me down. I started meditating this year, which was hugely helpful. You have to let this all out.”

So, what do you think about Emily and Josh dating in real-life knowing they play hated spouses on Revenge?  Do you like the way Emily and Josh have decided to handle their relationship and not to discuss it much with the media to keep a sense of privacy, which so often in Hollywood is hard to do?

And if you watched last night’s episode of Revenge, what do you think is causing Emily Thorne”s psychosis?  Is it inheriting the mental illness of her mother?  Or, is something else going on?  Is she being drugged?   Weigh-in!

Has Elizabeth Hendrickson Decided To Leave The Young and the Restless?

Thank you, Michael! Yes, they are very sweet couple.I have already seen many pictures (E&J) as a love couple..

Had no clue they were dating. Interesting how many romances begin on set. Must be fun for her to have American-accented Daniel…but be in love with the English-voiced one. And…he had a “fling” with Amy Winehouse. Quite the diversified chap…

“Quite the diversified chap….” I love the way you put that, rebecca1! It’s quite the understatement, too….no accounting for taste, huh???? That being said, I may be in the minority, but I see no transference of real-life chemistry between Emily and Daniel, never have. Honestly, I cannot ever really recall any male that’s truly meshed with Emily except for Nolan, and I think in the end that may be due to a familial tie. Although I adore “Revenge” and its premise, which keeps me coming back for more, I have to say that most of the people on the show… Read more »

Well thank you Shay! 😉 You do know that “Patrick” just grabbed the lead in a comedic pilot? He too may be gone with the wind from Revenge! Shame… And you know me too well…I disagree with most everything else you said! LOL I think VanCamp is excellent in the role (loved her in Brothers and Sisters; she played a completely different type…which shows me just how good she is.). I think she’s just the right amount of pretty, knows how to turn on the coquette or the cold calculator…she’s not being portrayed as a man magnet. She and Jack… Read more »

Well, we can agree about Charlotte (and Lydia)….I have always felt that Victoria’s daughter should have been more of a chip-off-the-old-block…a “Blair Waldorf” type! (Loved GG and especially Leighton Meester…that girl had the whole witchy sophisticate “thing” downpat!) But I guess they decided the apple that didn’t fall far from the tree was going to be Patrick….and yes, I am aware of JH’s new role….I certainly hope that it won’t mean a departure for Mr. Osborne….he has brought so much excitement to the show, and in such a neat package!!!! I guess the reason I expect more polish and pizzazz,… Read more »

Shay…Gilles Marini! HE is the French actor who makes me “swoon.” (never used that word before! but it fits… 😉 )

Never heard of Gregory Fitoussi…haven’t watched either Mr. Selfridge or Spiral. Perhaps I’ll check them out.

You remember incorrectly…I said I DON’T like Olivier after reading about his exploits with the not-so-nice Halle Berry…and his beat down of Audry. I did think Olivier was gorgeous in Unfaithful…but that was long ago and way before…

On a separate note, just a recommendation that has nothing to do with soaps, Frenchman or Revenge…have you seen the film NAKED? If not…check it out. Excellent!

No, rebecca1, I’ve never seen the movie you mentioned, but I checked out the summary on IMDb and the lead actress is a favorite of mine from “Scott and Bailey,” Lesley Sharp! She’s excellent, and that is another great Brit copper show. As for “Gilles,” I get what you mean, although I find him a bit too precious for my taste, but he was quite good on “DWTS” and deserved to go much further than he did. GF also has those same dark good looks like Marini, and he is wonderful in both French and British productions….”Spiral” is run on… Read more »

Gorgeous couple. And I love that they keep things private, for the most part.