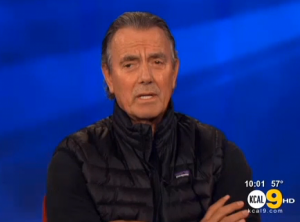 The entertainment world has been shaken since yesterday’s horrific news of the fiery car crash that took the life of popular actor, Paul Walker!

And this morning on local Los Angeles KCAL 9, the iconic star of The Young and the Restless, Eric Braeden (Victor Newman) appeared in a live segment and paid tribute to the Walker by recalling his early days on Y&R in the role of Brandon Collins, where Braeden played Walker’s on-screen boss!

Braeden remembered his time working with the motion picture star of most notably, The Fast and the Furious film franchise, “I had a feeling that he would make it on the big screen.   He had a basic decency and honesty about him … one of the most decent fellows I have worked with.  He was easy going, and just the nicest man.”

Watch the clip of Braeden sharing his sentiments on the death of Paul Walker, and his time on The Young and the Restless, after the jump!  Then, share your thoughts on the passing of Walker, and if you remember him in the early parts of his career on the CBS soap!

Debbi Morgan Bows Out Of Daytime Emmy Contention For Her Work On All My Children!

Loosing Paul Walker was shocking. As his fan watched him on Y&R. Luv Fast movies!! My deepest sympathy to his family. Look how Soap actors become part of you. Very Very classy of Eric Braeden words at this tragic time.

He and Victoria made a cute couple on the show. His persona exuded sweetness. So sad.

I agree. I hated it when they moved her to older men (Cole and Ryan, etc.).

I own a sports car we only drive when we are totally sober I hope this was not the result of a drunk driver I understand he was a passenger in a Porsche. My heart goes out to the family please understand only drive when you are sober especially a sports car! I always confused him with Ryan phillippe . Very sad!

I don’t own a sports car and don’t drive when I’m under the influence.

Nikki, Jill, Jack… have at him… yikes!

I do remember him on Y&R, that was the first time I ever seen him on screen;I remember being startled by how good looking he is. I realize over the years of watching his films he has a personality to match his physical looks. My heart goes out to his family for their loss.