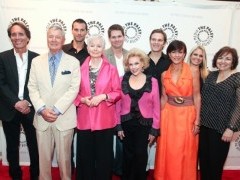 While so many nationwide  have followed As the World Turns and some for it’s entire 54 year run,  last evening’s special event honoring the show was especially significant.  And while many fans from across the U.S. could not make it to New York, The Paley Center for Media, held a tribute event complete with a panel discussion, Q&A, and meet and greet for those in attendance.

Come back later this week for more on this fantastic evening as a farewell to Oakdale, which looks back and their accomplishments, history, and the importance of the socially relevant stories they decided to tell.

Thank you for posting about the end of this amazing daytime serial. I grew up watching this show with my maternal grandmother, so I feel like another part of my childhood is being archived for good.

I LOVE VAN HANSIS: I would want to meet him and see more of him on screen! Such a beautiful/talented actor!

Thank you for posting the video of the Paley Center event for ATWT. I enjoyed watching the actors and head writer discuss the show. I will truly miss ATWT. Like a lot of folks, I grew up watching this soap with my mother, aunt, and grandmother. I adore the Bob and Kim Hughes characters and Nancy Hughes was so like my own grandmother.