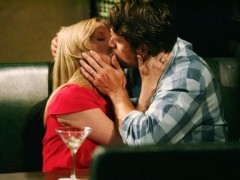 Surprise! If you missed today’s episode of The Young and the Restless make sure to see it tonight on SOAPnet, or go to CBS.com for a real shocker!  In the episode, a lonely and drunk, Christine (Lauralee Bell) ends up somehow making out with a lonely and drunk Nick (Joshua Morrow).   On-Air On-Soaps spoke with Lauralee about the shocking little twist that spiced up her return visit to Genoa City even more!

Lauralee on what went through her mind when she read the scripts, that out of the blue, had her making out with Nick Newman AKA Joshua Morrow :  “Here is the funniest part of this thing.  I get the script.  I look, and I think they must have written “Christine” instead of “Sharon”.  So, I keep on looking back and going, “This can’t be”.  I told Joshua Morrow that.  I think I struggled with this script for six minutes before I accepted it.  I would go, “Look… they did it again.  They put my character name instead of “Sharon”’.  Well, Josh and I cracked up on that day.  And, I was saying to some other press members on my return, “There is one day that you will watch and you won’t believe that my character could do this.”  And after we shot those scenes, people were saying, “You guys were cute together!”  It was hugely character building, and it shows Christine is a little more human and lost at the same time.”

Lauralee on why Christine was kissing Nick other than the obvious …their judgment was impaired: “Nina caught Paul and Chris kissing, and then she said, “I gotta get out of here. I am leaving town.”  Then, she tried to get Michael Baldwin to come hang with her, and then Nick was upset about Phyllis and Sharon, and then we got drunk and started making out.  Then afterwards it was like, “We should pretend this never happened. Goodbye.”  And it was a full on kiss!  So Phyllis comes in and sees me from the back and thinks it’s Sharon kissing Nick.  I had specific notes to have my hair look like Sharon.   So of course, Mr. Doug Davidson (Paul) the whole day of this shoot was coming up to me going “Hi Sharon!” (Laughs)

Lauralee confirms she has a close relationship with Joshua Morrow anyway.: “We are extremely close and it was piece of cake. We kind of laughed a lot, as there was a lot of kissing. I did not even tell Scott, my husband, because I was like, “What is the point!”  (Laughs)

all i want is phyllis and nick, everyone else makes me sick.

I felt so bad for Phyllis especially when she flashed back to Paris. I just cannot believe that Phick is over. BooHoo

I want Phick back too! Not liking this Nick and Sharon stuff.

Please let this be the final fork in the disgusting duo that was Phick, nothing could make me happier

I enjoyed them watching the game. The bet should of been kisses. Love Phyllis I don’t want her hurt anymore by snakey Sharon. Wonder what Fri. Has

Fun watching them watch the game. Kisses wager both would win. Oh what’s next for them? Hope Nick stays away from crappy Sharon. Oh love Phyllis wish she would get a loving true man!

Um, for Phyllis to be ‘outraged’ or in any way ‘unhinged’ by seeing Nick kissing either Sharon or fake Sharon (Christine) is really a laugh. Considering that she was a homewrecking tramp to begin with, she never once thought of how Noah would feel seeing her stealing Nick from Sharon considering the pair were still grieving the loss of Cassie. All I can say is, “Suffer Phyllis, suffer greatly…” I hope she’s remembering what she did when she came in between Nick and Sharon. But likely not. Phyllis is too self-absorbed to ever know that what she does is destructive.… Read more »