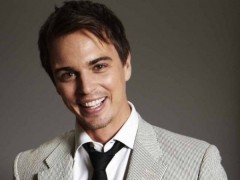 Wowza! Finally, The Bold and the Beautiful is going to spice up the Steffy/Liam/Hope triangle with another man coming to town who according to a B&B rep is, “clever and mysterious and a love interest for Hope Logan (Kim Matula)!

According to TV Guide Magazine’s Michael Logan, Daytime Emmy winner, Darin Brooks (Ex-Max Brady, Days of our Lives) is headed to the CBS soap to play the mysterious character of Wyatt Fuller.

Brooks will hit the air on the June 21st episode.  In an interview with the talented young star, Darin tells TVG that his first scene is of Wyatt taking a nude solar shower out in the woods at Big Bear!

Brooks reveals a bit about his new soap alter-ego getting into the Hope/Liam/Steffy mix:  “Wyatt will definitely get in the middle of all that and he’s the type of guy who will stand up for himself. Wyatt has no problems encroaching on Liam’s territory and stirring up the s–t. He’s a badass. (Laughs) He will definitely enjoy the drama!

So what do you think about Darin Brooks coming to B&B? Are you happy to hear that Hope may have a new man? Will Steffy eventually get her claws into him too? What would you like to see happen?  Let us know!

Is Hunter Tylo Exiting The Bold and the Beautiful For Good?

Darin is a great player. I think he and Hope would be great together.

I would have liked it before steffy lost the baby. I won’t be watching it anymore.

I HATE that Brad Bell killed Steffy and Liam’s baby. WHY?????

not a watcher of B&B but this will play one of two ways: he’ll be gone in three months (likely) or he’ll stick around, which is unlikely.

I’m glad to hear about Darin he is a great actor too,can’t wait to see what happens.

I am SO excited about this!!!!!! Even all triangles need a break and like Brooke/Ridge/Taylor, whenever the triangle broke up, the actors were put in other pairings to (mostly) great success!!! I loved Thorne/Brooke, Morgan/Ridge/Taylor, etc…….and it definitely mixes things up. That being said, Hope definitely needs some new lovin in her life(Oliver and Thomas aren’t gonna cut it), and Liam will of course be jealous, like Ridge was whenever Brooke wasn’t obsessing over him. I like Steffy/Liam/Hope, but other avenues need to be explored, and Hope is too young and beautiful to be pining, that being said, bring on Wyatt & Hope!!!! And stay away, Steffy!!!!!!!

Great! It’s about time to give Hope her own guy. Liam belongs with Steffy. I enjoyed Darin on Days. I’m sure he’ll be great on B&B. Remember, he won a Daytime Emmy for his Days’ role!

Is it genuinely possible there can be a B&B pairing outside the families? Is that allowed?

I’m through with the Bold and the Beautiful. Seffy loses her baby but almost 60year old Brooke, with 6 children by 5 men get to keep hers? I’m out.

I’m quite excited. Darin is a fantastic talent, and I’m hoping it fits in well with the acting talents of B&B.

I hope that Steffy don’t get her claws into him… She has gone after every guy that was interested in Hope…. Time for Steffy to step back and leave Hope to find her happiness again, since she is saying that Liam is her happiness!!!

I am hoping that Lope are the endgame, hate him with Steffy. But right now, Hope needs something fresh and new. Let her be with this Wyatt guy, and let Liam chase her for once.

Hope deserves somebody loyal to her so if this Wyatt character can do that than I am all for it.

So excited for the hope character. Steffy should leave this one alone.

Steffy and Liam deserves to be together and William Bell makes me sick that he killed Steffy and Liams Baby….I’m so glad that this Wyatt character is comin to town and now she can move on with him and steffy and liam can work things out and be happy….

it is about time that Hope finds a man who loves her truly. When you love some one,you do not run to another women so easily. Who wants a man that you can not trust. Too bad for Liam….he had his chance with Hope. Hope is a good person…give her true love…

Writers Hope deserves true love…not from Liam…At one time I wanted to see them to-gether ,but he is too weak….you either love some one or you do not…if you are in love with some one…you do not kiss another women…like Liam did in the car when Hope was waiting for him…

Get him together with Hope so she stays out of Steffy’s life. Let Liam go to Paris and get back together with Steffy. She will get pregnant again and they will have their baby. That is the best way to have this play out. PLEASE!

I enjoy watching Darin Brooks on the B&B. He’s brings a great deal of interest to the show. I see him with Hope for sure, and think they work well together. As for Steffy, I would like for her if she returns to stay with Liam. Those two seem better suited for each other. I don’t see Wyatt allowing Steffy any access to him given how Hope has been hurt by Steffy’s manipulations and Liam’s insensitivity. Most likely Quinn would step in to deal with her. I would like to see Wyatt and Hope get married and have a great successful life without the crap. The writers should go pick on some other couple. Hope has had enough of the nonsense for 3 years and so have I.

Ok, personally I think that Liam and Hope as well as Wyatt and Steffy (when they meet) are better for each other but that is my personal option.

READ MORE
Stacy Haiduk On DAYS Exit: "Let’s Not Write Kristen DiMera Off Quite Yet! Is Anyone Really Gone in Salem?"
Continue Reading