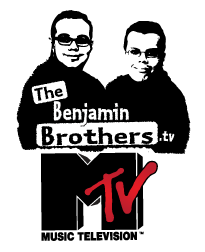 Two of your favorites from the world of daytime soaps have made this very special real life story come to a fruition to the masses, and it’s an important one!

From former All My Children, Guiding Light, Another World, and current Beacon Hill favorite Ricky Paull Goldin, and former All My Children star Debbi Morgan, along with principal EP Brian Flanagan, comes an important real life story of the Benjamin brothers, that will air next Saturday, April 26th on MTV’s True Life Presents The Benjamins! (7PMEST/6PMCST)

The cameras follow brothers Kenny and Brad who have autism spectrum disorder. The brothers  live with their parents in Bowie, Md., and are taking steps towards greater independence – they’re learning to shop for groceries and cook their own meals, preparing to get their driver’s licenses and increasing their social interaction by throwing a dinner party.

In addition to wanting jobs and girlfriends, “We want what lots of people want,” Kenny says, and both brothers aim to increase awareness of autism.   “We want the people to show great respect for autistic people,” Brad, 24, told PEOPLE. “Not to be called names. We have the same problems as other normal people do. We have challenges that can make it harder.”  We’re smart, we’re fun and we’re polite,” Brad says. “My bro’s nervous about being on TV because people might make fun of him. So am I. ‘Cause people aren’t always kind to us. They should be kind to all people who have autism.”

This special True Life Presents …  is an observance of World Autism Awareness Month. And in addition, this Wednesday in Washington D.C.,  The Grantham Hotel is hosting a reception in honor of Brad and Kenny in a show of support.  You can get your tickets here if you are interested in attending, and will be on the east coast.  And for more on The Benjamins, visit the show website here!

Watch a preview clip of True Life Presents The Benjamins below! Then, let us know what you think of the project from Debbi and Ricky?

The EJami Episode Airs Today On DAYS! The Can't-Miss Scenes!

What To Expect For Susan Lucci's Genevieve Delatour In Season Two Of DEVIOUS MAIDS!

It’s on MTV though.

I stopped switching to that channel when they stopped playing music videos in 1999. Not even Cynthia Watros or Debbi Morgan can get me to tune back in.

Looks awesome. Wow my heart goes out to those young men and their journey for independence, just plain beautiful.