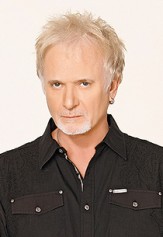 In a great sit-down chat via ABC Soaps In Depth with the three Spencer men of Port Charles; Tony Geary (Luke), Jonathan Jackson (Ex-Lucky) and Nathan Parsons (Ex-Ethan), the Daytime Emmy nominated actors from General Hospital talk about their on and off screen relationships. Plus, helping each other pick their Daytime Emmy reels, which landed each of them in the three main acting categories heading into the Daytime Emmy telecast on HLN on June 23rd!

Nathan: For Ethan, I think I need to kill Helena. A little bit of revenge.
Tony: Give it up, son. She can’t be killed. As long as there’s a drop of blood to suck, Helena’s immortal.
Nathan: I think Ethan should go on a killing spree, personally. But that’s just me. So, that’s unfinished business. Ethan could just become The Cleaner.
Jonathan: And well, for Lucky, he did leave his kids at Christmas…
Nathan: Jerk!
Jonathan: So, I’d say there is some unfinished business there! And Nathan and I never got to do a con together.
Nathan: I know!
Jonathan: That was the big tragedy for me. Luke, Lucky and Ethan, and Lulu, should have done some big awesome con.

Tony: I agree. That was a major production mistake, and a terrible waste. The whole family was primed for a great adventure together. The audience would have loved it, and it would have been completely consistent with our family history. Sometimes they miss the most obvious story ideas. It’s frustrating.
Nathan: Yeah, we didn’t get to do that; they never went there. And then by the end, Ethan gets offered to go steal diamonds with Luke and he’s like, ‘Oh no, no. I’m good.’

Jonathan: Yes, Lucky would do the same thing, just turn down Luke’s offers to work together.
Nathan: I’m like ‘who is this person?’ That’s not the character I created.
Tony: Luke has profound unfinished business with both his sons. Lucky just disappeared out of his father’s life the same way Luke had done so many times. Things were left very bitterly between them. There is still the ghost of Jake binding them to each other’s pain. It would be wonderful to have reconciliation or some kind of resolution there. And, as for Ethan, Luke sent him away with a big lie to carry. It was such a selfish thing to do, saving his friend’s life (Robert Scorpio) by sacrificing his relationship with his youngest son. There is a lot of unfinished business here. There isn’t one day at I work that I don’t think about having lost both of my sons. It helps me keep in touch with what a broken bird this Luke Spencer is.

So soapers, what would you like to still see happen to the Spencer Clan of Ethan, Lucky, Luke and Lulu?  Let us know!

Would You Like To See Valene Show Up on TNT's DALLAS? Joan Van Ark Would!

Jeff Branson speaks on his return to The Young and the Restless!

I hear rumblings that they are working to recast Ethan to cause problems between Luke and Anna and as a possible love interest for Kristina. That stinks, but I think the character was very good for GH.

Is Nathan still under contract? I’d heard he wasn’t going to be renewed.

I want to see Lucky stay far away from Elizabeth. That relationship is toxic.

It is a shame that Luke hasn’t seen his sons. I was never a fan of Ethan being his; I wanted him to be Robert’s kid.

It would be fun to see the whole family do a con but now that Lulu’s married to Dante, I don’t see her getting on board.

Lisa, Nathan was fired from the show and is no longer under contract nor on recurring status with GH! Ethan is GONE! 🙁

Nathan, wasn’t fired from the show. He told the previous regime he was leaving when his contract was up and he did just that. Now that he is on another show, I doubt he will come back. I have no problem with giving Luke another son, but to make Holly the mother is just wrong. She never would have cheated on Robert and the writers totally messed up Robert & Holly along with Luke & Laura history to create Ethan. That is sooooo not what the fans wanted to see! Love all three of these guys and I would love… Read more »

Aww, if and when GH gets the ax, I would like to see Jonathan Jackson come back and reunite his Lucky with Rebecca Herbst’s Liz. I don’t think they are toxix – I think the writing for them has been toxic. Having Liz sleep with Nikolas was just dreadful. They can fix them and have them ride off into the sunset together. After all, they share Cameron plus they are the bio parents of Aidan.

I would surely love to see the “Spencer Clan” in a con of some sorts. and it’s true what they are saying, they writers surely missed that boat !! I could see them coming back, Eathan ( he’s just keeping Robet busy ) as for Lucky, well his last scene was him looking up at someone at the church or grave site. Always wondered who that was? as for Lulu, being her charector did a shift, I can see her totally being on board with what her family does. Who knows maybe they can be to ones to solve this… Read more »

I refused to believe that Ethan is Luke’s. That was such a slap in the face to R&H fans.

The whole Spencer family being part of a con would be a great use of history and showcase the talents of my favorite family on GH. I wish Jonathan and Nathan the best in their new projects, but it will always be my wish to have the original Spencer boys back.

I could care less about Luke, Nathan, or Lucky. GH really hit an all time low by destroying the characters of Robert and Holly in order to make Luke Spencer once again the hero. Pairing Luke and Anna is downright ridiculous to me. I am sick of Anna and Luke. Robert and Holly should be given a story and reunited! Tristan Rogers and Emma Samms both look great. Emma is still as beautiful and sexy as she was in her heyday, and Tristan is still extremely sexy. Let us see this couple have a believable storyline.

I love the Spencer’s and ALWAYS will…

I have a post about u tube, explaining everything I think our posts have vanished, love those spencers.

Wow… one of my first… i don’t believe this re-cast…. when Dynasty first started….. Pamela Sue Martin… was a big time star in the making…. Ms. Nancy Drew. LOL.. Ms. Posieden Adventure. She quit Dynasty… along comes Emma Sams… and the rest is history… I just couldn’t get in to her, on dynasty… thankfully, they had Sammi Jo… don’t even get me started on Pamela Bellwood… Claudia. The Carringtons! ooh la la… mai we!

The unfinished business is to undo the damage to GH’s first two super couples and say the CON is that Luke and Holly lied about cheating on their spouses. Ethan is Robert’s son.

Back in the day, Luke was not known to be a con artist, it was only after Holly came along when Luke’s character changed. actually (cousin) Bill was more of the con. Luke was all about Power and prestige and thriving on the danger.

Also Bobbie is totally needed, and is a missing void. It used to Bobbie and Luke was her Tonto. I would like to see Bobbie involved.

Enough about that article.. Done with it……………