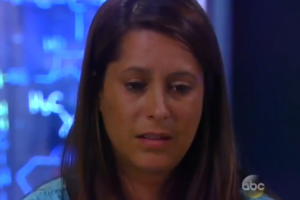 Over the past few days General Hospital has delivered a feast for its fans where several long standing stories have exploded wide open!  The Monday and Tuesday GH offered up so much, but top on the list was the return of Kimberly McCullough and the whereabouts of the believed-to-be-dead Dr. Robin Scorpio Drake!  Plus, the long awaited reveal that Dante (Dominic Zamprogna) and Lulu’s (Emme Rylan) baby is really the biological daughter of Maxie (Kirsten Storms) and Spinelli’s (Bradford Anderson), and that the couple has been duped by Maxie for months!

Here is how it all came about: when dying Luke Spencer (Anthony Geary) meets up with the heinous Jerry Jacks (Sebastian Roche) on Cassadine Island, we come to find out that Jerry also needs the cure from the toxin he used to poison Port Charles, and his connection to Faison and Dr. Obrecht (Kathleen Gati).   It seems Dr O  found a doctor to make the cure, but there is only enough to save one person, and that is going to be him!  Next, Jerry enters the highly top secret area of the Cassadine compound where lo and behold there is Robin alive and working on the cure!  Jerry really ramps up what he thinks is an incentive for Robin to work faster to find the cure, when she shows her a DVD from the Nurses Ball.  In a heartbreaking moment played beautifully by Kimberly McCullough, she sees Patrick (Jason Thompson), Emma (Brooklyn Rae Silzer) and oh yes, Sabrina (Teresa Castillo) for the first time and vows she will find her way back to them.

Additional wallop to this story was played in masterful scenes featuring Jason Thompson and Finola Hughes (Anna) where Patrick admits to Anna that he is still wearing his wedding ring because a part of him believes Robin is still out there somewhere, although illogical.   Anna does her best through her own pain of missing her daughter to tell Patrick to move on with his life, or he will lose Sabrina.  Later, Anna meets with Duke (Ian Buchanan)  heartbroken.  She admits she has been thinking about Robin and can’t let her go.  And that she feels like a hypocrite for telling Patrick to take off his wedding ring and move on, because she feels Robin is still alive somewhere too!  Patrick in emotional moment, finally takes off his wedding ring after admitting to Sabrina it’s just not fair to her.  He says he will always love Robin, but he is ready to move on with her.

Meanwhile, Brad (Parry Shen) comes to the christening of baby Connie to do the right thing and tells Dante and Lulu that their baby is really the bio-daughter of Maxie and Spinelli and then leaves!  While Maxie and Spinelli try to deny  it, Dante won’t let it go so easy and is beginning to put the pieces of the puzzle together, and so is Lulu!  Next, Dante and Lulu unleashed their frustration, heartache, and their betrayal all over Maxie, as Maxie hones up the story of her miscarriage and getting pregnant by Spinelli!  Maxie tries to explain she was giving the couple her baby, but Dante says kids are not interchangeable.  However, no matter how much Maxie protests, and after Lulu slaps her, it’s apparent the couples wil be at war and their friendship is over.   Dante and Lulu leave the scene leaving a shattered Maxie in the arms of Spinelli!  Kudos to the performances of Emme Rylan, Dominic Zamprogna, Kirsten Storms and Bradford Anderson!

And if that wasn’t enough? Dr. Obrecht came back to see her daughter Britt (Kelly Thiebaud), then knocked her out, and kidnapped her baby, Ben!  What is Dr. O going to do with Ben?  Is she going to use the boy on Robin?  Is there some other masterplan?

Ashlyn Pearce Cast as Alexandria Forrester on The Bold and the Beautiful!

After Delivering The Best Performance Of The Night On DWTS, Brant Daugherty Opens Up About Being Mugged At Gunpoint!