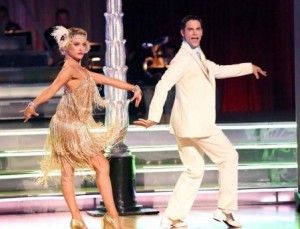 On last night’s Dancing with the Stars, Pretty Little Liars star Brant Daugherty received the highest score of the night, a 27 from the judges for he and his dance partner, Peta Murgatroyd!

The duo danced the Quickstep to a flapper remix version of  Beyonce’s Crazy in Love for Hollywood Night.  In it, Brant played the matinee idol to perfection and he emerged as one of the contenders for the Mirror Ball trophy, if fans vote for him!

Shockingly at the end of the night, during the live elimination from last week’s viewers vote combined with the judges score from last night, Brant was in the bottom three! Luckily, he wound up being safe!

But, Brant was not safe last week when he was actually mugged at gunpoint on his way home from the live Dancing with the Stars taping!  A detail that was revealed along with the fact that Brant had torn a ligament in his foot during the video segment of the duos rehearsals, before Brant and Peta took the stage last night.

Brant opened up to PEOPLE backstage after DWTS with the details on the mugging incident:  “After the show I got dropped off and was walking up to my apartment building and a man followed me up with a gun and told me to give him my stuff. It was a complete random occurrence of events and it led up to one of the worst nights of my life – after having such a great night last week on the dance floor.”  Daugherty also related that his mugger made off with a pair of workout pants, two T-shirts, dance shoes, a toothbrush and his cell phone – making it impossible for him to contact the police immediately.

Peta Murgatroyd also revealed how Brant was of course, rattled by the situation during their rehearsal after the incident:
“He came in the next morning … and he was so flustered and emotional. I was like, ‘Oh my Lord, he’s had the worst time.'”

With a horrific week, Daugherty pulled off what the judges deemed as the best dance of the night!  Watch his DWTS performance from last night below and let you know what you thought of it? Are you rooting Brant on now more than ever knowing the hell he had gone through, almost facing elimination, and dancing his way hopefully into the hearts of the voting public?  Weigh-in!

At least he still has his life. Material possessions can be replaced. Good luck to him.

I am so sorry for anyone who have gone thru that experience. I am not a big fan of DWTS but I try to tune in for his performances, he is a great dancer. I hope this show brings him some solid exposure to casting directors and producers, he has what it takes to be a major film and television actor.