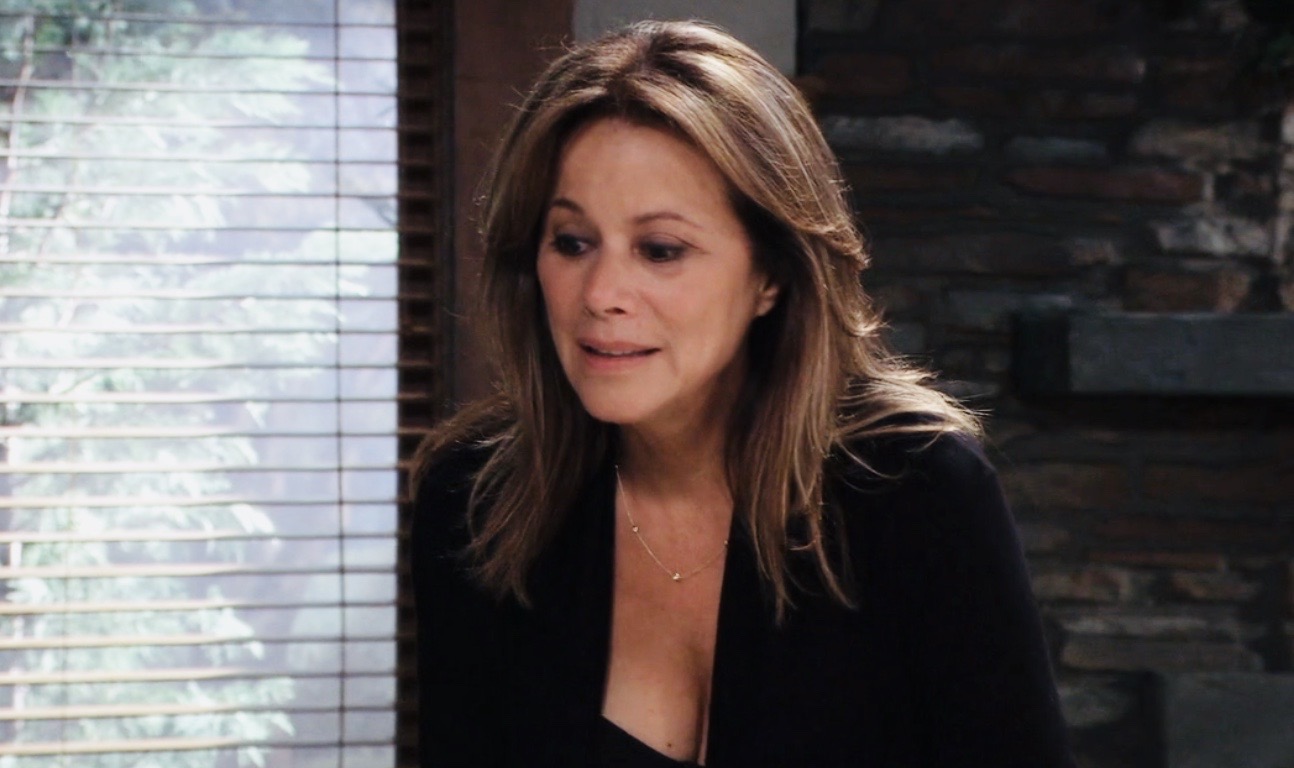 Monday’s episode of General Hospital had another shocker of an ending.  We already watched last week as Nelle (Chloe Lanier)”fell” to her supposed death, and Carly (Laura Wright) has now gone along with Jax (IngoRademacher) lying to Valerie (Paulina Bugembe) that she lost track of Nelle and she got away.   Now Carly will feel guilty for keeping the truth from Michael (Chad Duell), Willow (Katelyn MacMullen) and Sonny (Maurice Benard).  But will she tell Sonny?

Speaking of Sonny, he goes to Turning Woods to visit Mike (Max Gail) and Mike is declining rapidly, and Sonny is trying to hold on to every moment he has with his dying dad.  Later, he asks Carly what happened with Nelle?  She has yet to answer.

Meanwhile, finally, Willow and Michael share a kiss and then later look more into each other than ever as they now have Wylie home safe and sound at the Q’s.

Then in a moment know one saw coming, after Neil (Joe Flanigan) and Alexis (Nancy Lee Grahm) finally admit to each other how much they want to be with each other, and missed each other, the two share a kiss and Alexis lets him know she wants to have sex with him now. (Of course, she was a bit more subtle than that!)

Basking in the afterglow, Neil says they can take this at their own pace and Alexis says they don’t have to keep their distance; as they have been doing and dancing around each other for months.

In the morning, and after what appears to have been another round of sex. Alexis brings in some coffee to him and is chatting away, when she sees Neil’s feet which are cold and that he is unresponsive.  When she goes to turn him over and touch him he is very pale and cold.  Alexis is stunned.  It would appear that Neil has died.  Fade to black.

In a tweet, following the airing of today’s GH, and the comments from fans, Nancy Lee Grahn kidded, “My fiancé after hearing about today’s #GH has requested to sleep in the guest bedroom from now on.”

So, what did you think of the ending of GH?  If Neil is dead, what will happen next to Alexis? if he is dead, are you pissed GH killed him off? Comment below.

My prediction here is that Neil was “self-medicating” with some sort of opiate substance, which of course, Alexis knew nothing about.

Odds are he got some bad drugs, probably laced with Fentanyl and accidentally overdosed. And of course, the source of the drugs will trace back to Cyrus the virus.

Hope they don’t turn this into a serial drug death kind of thing, but they have already dropped hints of Sasha having a cocaine habit, so she will probably be the next one to go.

Sophia mattson is extremely popular so I don’t see her being killed off , I do agree with you about Neal’s sudden passing being linked to cyrus . ( I told all jeff Kober will show u the definition of a bad to the bone monster)

I’d argue that Joe Flanigan is more popular than Sofia Mattsson. Regardless, in a show that needs to trim its cast, both play expendable characters with no family ties to anyone in PC. I say that, even though I like Neil and his relationship with Alexis. I was just thinking earlier in the episode that the show hasn’t shocked me in a while. Nelle at the cliff wasn’t out of the blue as we knew the character needed a break for a (little?) while. At first, I wanted Alexis to be dreaming, but now hope they stick with it. The… Read more »

She will be the next to go- Frank Valentini has a budget to cut because of the covid laws.

I hope it does turn into a “serial drug death kind of thing.” They had potential of major kills when Ryan Chamberlain returned to town; instead, only one main character (Kiki) died, and the rest were all one-off burner characters. This could be a way to free-up the canvas and clean things up. I could think of a handful of characters that could be offed, and Sasha is not one of them.

Yes, I am totally pissed!!!!! LOVED the character of Neil and thought they really had a great opportunity to finally give Alexis some real happiness. A real romance for older adults. RIP Neil! Will miss you, Joe Flanagan!!

Shari ! “Thank You” All i’ve ever asked, in like, FOREVER

Patrick…I agree what a waste. I liked him with Alexis. It could have been interesting if the writers found a way to get them reinstated into their careers again. In PC you can always use a good lawyer, and with all of the trauma going on a psychiatrist. I have been catching Joe on reruns of Stargate Atlantis. Liked him on this series as well.

I hope it is a dream

I liked Neil, so it is a shame that his character has seemed to have been killed off, especially since I was hoping Walt Disney Television would share his publicity images that were shot last year. This couple had potential, and it is said to see that it has ended.

Also, am I the only one having problems playing episodes on ABC’s website? Has been that way for quite some time. The ads will play, but the episodes will not.

Hello Scott, I LOVE Neil and Alexis and if Neil is dead he/Joe Flanagan will be missed…Scott, YES re:ABC website…it’s the one I always have trouble with, don’t have this issue with CBS, barely watch anything on NBC but when I do most of the time their website works ok…

I have all kinds of issues with the ABC app,I watch on Hulu instead.

a great actor and great character is shown the door.

So not gonna be happy is he’s dead! It starts in my area in just an hour, so I’ll be watching and screaming if he is dead.

Why can’t the writers let Alexis truly be Happy? Neil did that for him why did they kill him off?

Oh Alexis, you underestimated your sexual powers! Seriously, maybe Neil took a little too much Viagra, but I think I underestimated my own wishful thinking. The moment I saw Dante’s Dr. Dr. Kirk, and read that he was going home I said to myself, whoah!there’s the man for Alexis and immediately yelled to the TV, bring him home with you! I did not recognize him as Christopher Cousins from the other soaps he’s been on but I tell you folks, the EYES sold me. He’s one good looking man.

It would be great if we could see a full episode! Interrupted by covid or rioters!