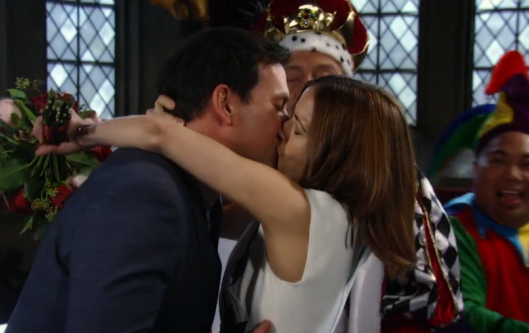 On Wednesday’s episode of General Hospital, Nikolas (Tyler Christopher) and Hayden (Rebecca Budig) had their very “quickie’ Las Vegas wedding, which included Nikolas requesting Hayden sign a pre-nup before the duo said their “I do’s”.

And its not a bad deal for Hayden – Nikolas told her she would get $5 million dollars in the divorce settlement. When it came down to their alloted 2 minute ceremony, Nikolas asked the chapel officiating court jester and “king” for five more minutes for $500 dollars. But what was most heartwarming and touching was Nikolas’ speech that he prepared to say to Hayden, which fit perfectly with the couple’s shenanigans, double-crosses, and general mistrust of one another, no matter what they say.

Nikolas began saying what he was going to recite:  “It’s an old Irish blessing.”   Because he is a Cassadine of Greek descent, Hayden responded, “Not Greek?”  To which Nikolas replied:  “Trust me, this suits us better.”  Nikolas says the vows:  “When we steal, may we only steal moments together.  When we cheat, may be cheat all misfortunes.  When we lie, may it only be in each other’s arms.”  Hayden is blown away and realizes she has nothing to recite back.  After exchaning rings, very quickly the couple are married.

After it’s official, and as Hayden is leaving the chapel as Mrs. Nikolas Cassadine in the very last second of the episode, a man appears and calls out to Hayden and says, “Rachel?”

So, will we finally begin to find out who Hayden truly is?  What did you think of the performance of Tyler Christopher during the wedding and the reciting of those oh-so-perfect wows?  Is Hayden still going to double-cross Nikolas … or vice versa?  Share your thoughts in the comment section below.

Daniel Cosgrove Making A Return To Days of our Lives!