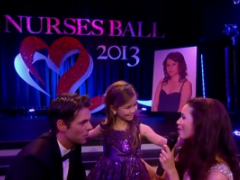 Today was part three of General Hospital’s 50th anniversary celebration and the return of the Nurses’ Ball and what a finale it was!

Teresa Castillo as Sabrina led the way for the last number of the episode and the Nurses’ Ball, entitled, “You’re Not Alone” which was sung in honor of  little Emma Drake (Brooklyn Rae Silzer) who was brought to  the stage by her father, Dr. Patrick Drake (Jason Thompson).  Emma asks Sabrina and Patrick, “Do you think mommy is watching us?”  And from there the tears, and the hankies, for many General Hospital fans began to flow!

And what about Teresa Castillo’s beautiful singing voice and Jason Thompson’s?  Next, Emma runs to her grandmother Anna, the always splendid Finola Hughes, and what happens next was a wonderful show of support and unison by the cast of GH, as the Nurses’ Ball attendees surrounded the stage holding hands and standing tall as Sabrina and Patrick finished the final tune, with Robin’s (Kimberly McCullough) picture looking over them.   More hankies!

One other number that was also a favorite of the episode was Sonya Eddy’s Epiphany singing The Pointer Sisters classic “Jump” accompanied by The Revelations , who turned out to be none other than Monica (Leslie Charleson) and Tracy (Jane Elliot)!  And,  how about Lynn Herring as Lucy who navigated between one introduction to the other with humor, heart, and emotion, that made the whole evening palpable.  What a treasure Lynn is to the history of The Nurses Ball!

There was that phone call in the middle of it all, when Michael (Chad Duell) receives devastating news that Starr (MIA Kristen Alderson) is apparently not coming back to Port Charles!  Of course, we don’t know what was said on the other line!   Molly (Haley Pullos), TJ  (Tequan Richmond) and Nancy Lee Grahn’s  (Alexis) real-life daughter Kate, performed a song of Kate’s entitled, Private School Girls!

And then there was “Britch” (Kelly Thiebaud) revealing she is “pregnant”!  So, is she really? And if so, who is the real baby daddy?  Patrick?  However, after that beat was revealed, it was Finola Hughes and Ian Buchanan’s as Anna and Duke and their touching scene with Emma backstage, after Emma is upset over Britt being pregnant, that provided another memorable moment on the episode.

Now below, watch Teresa Castillo, Jason Thompson and Broolyn Rae Silzer in the emotional heart-tugging Nurses’ Ball finale!  “You’re Not Alone” is now available on iTunes for purchase!   Let us know your thoughts on the final moments and your lasting impressions of The Nurses Ball 2013!

Which One Life to Live Star Does Rama Patel's Accent Best? – Watch The Video!