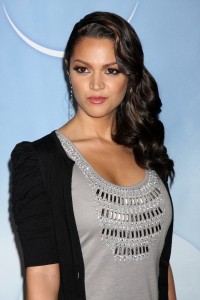 The Online Network announced today that Paula Garces, best known for her role in “Maria” in the Harold & Kumar film franchise, will join the cast of the beloved serial drama All My Children, re-launching on April 29th on Hulu, Hulu Plus and iTunes thanks to The Online Network.

Garces will portray Lea Marquez, a smart, savvy, beautiful woman who’s devoted her life to a career of fighting crime and bringing down the bad guys. Lea’s career takes up most of her days and nights, which leaves little time for a personal life. That is, until a man challenges her safe, controlled existence and threatens to open up the part of her she’d long since put to rest, her heart.

Expanding her career further Paula Garces created “Aluna”, the first Trans-media Latina superhero character, which debuted at San Diego’s Comic Con in 2011. Aluna is currently licensed to an online game called “Heroes of Newerth” and she is being played over 45 thousand times a day worldwide. Ms. Garces has partnered with Sekret Agent Productions, the creative writing team behind “Assassin Creed”, to rewrite the Aluna comic books. They will release the new series at San Diego’s Comic Con July 2013 as a trilogy.

So soapers, who do you think Garces as Lea Marquez will mix it up with in Pine Valley? What do you think of this bit of casting news? Let us know!

She was also on Guiding Light as Pilar Santos

I thought she looked familiar!

Good for her! Wonder if she will be Griffin’s new lady.

I was just thinking the same thing.

I thought i was reading GHs Anna Devane bio after reading this characters description!

I kept watching her scenes with Zack on AMC on Hulu and couldn’t quite place it until I realized she was Tina on The Shield.