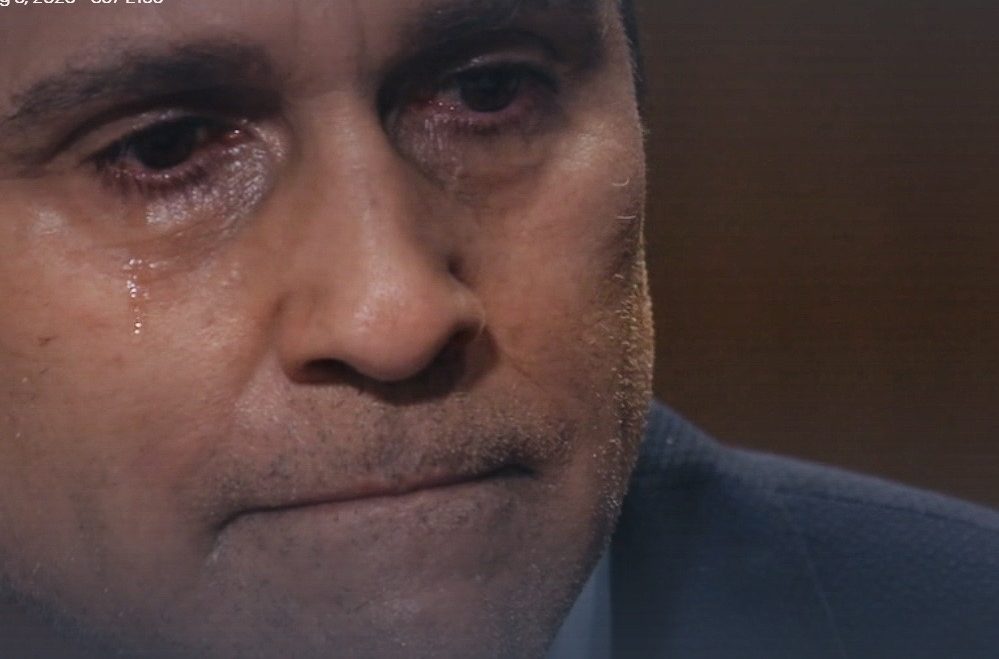 For anyone who has gone through losing a loved one to Alzheimer’s Disease, Wednesday’s episode of General Hospital would bring them right back to the place they found themselves in when faced with the difficult decision of what to do when there is no more hope, when the disease has progressed to its most advance stages, and wanting the person they love to die with what dignity they have left.

Through Sonny’s journey played beautifully by Maurice Benard, we see a son who wants to do what he can to prolong his father’s life, holding on to the moments where there seemed to be some signs of life within his dad, and not wanting the guilt of being the person to make the ultimate decision – in this case to put Mike (Max Gail) on a feeding tube, when he no longer has the desire to eat.

Wanting to move forward with the procedure to have a feeding tube put into Mike, Sonny runs into Felix (Marc Anthony Samuel) who tells him about Yvonne, and how she is at GH on a feeding tube and a ventilator and strapped to a bed.

When Sonny sees how Yvonne is hooked to machines, it is a real awakening for him,  That, coupled with one of the most important talks and moments in the Alzheimer’s storyline when Sonny speaks to Elizabeth (Rebecca Herbst)  – who tells him how she sees Mike, who is now a shell of himself, who doesn’t smile, doesn’t eat, and so forth – Sonny is aware of what he truly needs to do.  These scenes they were played to perfection by Rebecca Herbst and Maurice Benard, and couple that with Laura Wright and Steve Burton as a concerned and emotional Carly and Jason; seeing how this situation is ripping Sonny apart, and also facing that Mike will die, they too are devastated and delivered hankie-filled moments in their scenes.

The final minutes of the episode featured father and son in a simple, quiet, and powerful scene where Sonny tells his dad, he is not going to have a procedure, and that it’s OK for him to go.   Mike, in tears, hears what Sonny is saying and is relieved.  Sonny has set him free to die, and now Sonny must face his decision – a selfless one that any of us who have been in this position know has to be done for their loved one; so there will be no more suffering and no more pain.  Kudos to GH for today’s scenes in this storyline.

Watch the scene between Sonny and Elizabeth below.

Now let us know via the comment section, how do you think GH handled this major moment in the telling of the Alzheimer’s storyline? What did you think of the performances?

Watching Maurice Benard who plays sonny in these scenes feel so real, you can feel the pain and see it in Sonny’s face, and seeing The underused Rebecca Herbts beautifully come in and try to offer some insight in what mike is going through was beautifully acted. How she keeps being underused is heartbreaking in itself.

Becky Herbst is such a gem and GH needs to realize that. She’s a Webber & her husband is a Baldwin. They come from the show’s legacy & their family should be a cornerstone in PC. I absolutely loved that her dialogue mentioned Mary Mae’s Grace Realized speech to Stone. That being said it’s high time for Mike to die.

i’d actually enjoy “milking” Max Gail wherewithal too. I just don’t buy the character of Sonny… who never truly had a relationship with his father. PLUS @GH , even Frank Valentini… said, however long it takes to play this out. what are we waiting for ? Get Michael Easton for a miracle cure… or get over yourself.

it’s to the point of scratching my eyes out !!!! OVER Sonny/Carly/Jason ???? who’s making this show

WHAT I SEE : is clearly HOW OLD he is. to watch him play catch up with emoting… with normal denizen ???? his gun is stuck in his pants