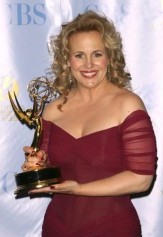 The newest cast member of The Young and the Restless, soap superstar, Genie Francis opened up to EW.com on how the move to come to the number one soap came about, and how her appearance on Oprah really was the beginning of a new chapter for her, and yet it felt like her General Hospital life may have come to an end.   Here are a few excerpts from the interview from the fantastic Francis!

Genie on how she was offered the role of Cane’s mom on Y&R: “I got a call from [Y&R Executive Producer] Maria Bell three or four weeks ago. She explained to me that she had seen me on Oprah and liked the idea of what I wanted to play, and she had an idea of how to write that, how to incorporate that into A story on Young and the Restless. She would create a new role for me. I wouldn’t be coming in to replace someone. She called me personally to ask me if I was willing to listen to an offer, and I said, yes, I’m willing!”

Genie on how she thinks her fans will respond of her moving away from GH: ” What I have found is that my fan base will follow me to whatever I’m doing. They gave me a big tune-in for Hallmark. They were just happy to see me working again, and my job is not to disappoint them, not to cheat them. And I feel like the last little appearance on GH cheated them. I welcome the opportunity to do something new to continue to entertain my audience. What I loved about Laura — and what people loved about Laura — is that she is a terrific memory, but it’s just not there anymore. [GH] cannot conceive a Laura who is 48 years old, a grown woman. So that’s that. I’m a little surprised, too, since this year is the 30th anniversary of Luke and Laura’s marriage. (The wedding aired on Nov. 17, 1981.)”

Genie on her Oprah Show comment where she stated, “there is nothing in me that is willing to play a victim anymore.”  when Oprah asked whether she would ever return to GH: “I guess I didn’t really think about how it would be received. I just felt like it was time to talk from my heart, and tell the people that yes, I’d love to come back to work, but I want to work in a way that uses all of me so I’m not just cheating my audience. I felt for a while with the GH appearances, they were kind of using me as a media trick, bringing me on for three or four weeks, saying I was back on the show, but not really writing for me. And then I would be gone. I just didn’t like that anymore. I guess it was me putting my foot down. I would have loved to come back to [General Hospital], but I needed them to write a real role for who this woman would be now. They didn’t respond. I didn’t hear anything. And that’s a shame. I was willing to put it out there, see what could be done. But I did receive a lovely call from Maria!”

Ring My Bell!! Good For Genie Y&R is going into May Sweeps Full Speed Ahead!!!!!

Good for Genie and good for Y&R.

No wonder Y&R is #1 they are so frickin smart over there. Thanks for posting this, GH can be sooo stupid sometimes, this is so one of those times.

What a smart woman. Y&R are lucky to have such a talented actress. Gh is hopeless!

I agree with YOU, Genie! GH should have had the intelligence to write Laura as a smokin’ hot Cougar who’d recovered physically & mentally through some soap opera miracle. She could have arrived back in Port Charles with a “boy toy” in tow and put the entire town on its collective ear. Ignoring Luke, after finding him married to the shrewish Tracie, she could also have come into money somehow and just had a blast with the entire cast. She could have been written so completely opposite of the victim she once was and now be the strong, determined and… Read more »

Boy, do I agree…GH has hired writers fromOLTL which was cancelled. I guess GH will be the next to go. Love you Genie

You tell em honey! Kudos to you! Stupid is as stupid does, and GH is nothing if not stupid.

Go and kill it over on YR!

She hit the hammer on the head. They don’t know how to write a 48 year old Laura. Shameful the way Frons and GH treated Genie. It was Luke AND Laura’s wedding that was the daytime high water mark. Frons and ABC forget that.

genie i am so glad you put your foot down with gh – i was glad to see you back on gh but so disappointed the way they wrote for laura – your fans deserved much better than that – best of luck on y&r – can’t wait to see you in genoa city!!!

I am so excited ! I will follow her to Y and R ! She will be great with Tristan Rogers. They had great chemistry on GH!

Absolutely correct Ms. Francis they never appreciated you GH is always about the male characters! Thank you Y&R if Genie had went back to GH I would have had to start watching that poor excuse of a soap again!!!!

genie is so rite general hospital does not know how to write they did the same thing to Emma samms also when she came back and when Kristen Wagner and robin mattson .abc should just cancel general hospital !!

I love watching you on Y & R and was really surprised that you have a shop in Belfast, Maine. I live in Canada but only about a three hour drive from there. We go down that way often to Bangor and Portland shopping and am excited to stop by your shop. Do you live in Belfast too?

Have a great year and hope to see you on Y & R for a long time to come!

GH and I go way back to its roots. I have watched on and off thru the decades. Luke and Laura were my super couple. Now retired, I’ m again hooked. Luke and Tracy don,t do it for me. I have waited for Laura to reappear because ther is so much reference to her in the script. I guess they write for the youger generation but look how many boomers are about to retire and would watch to see L&L celebrate their 30th wedding anniversary!! I watched Y&R just by chance and saw Genie! So I seached her out. No… Read more »