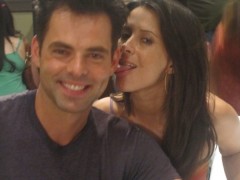 On-Air On-Soaps caught up with General Hospital’s, Jason Thompson (Patrick) at yesterday’s GH Fan Club Weekend Main Event 2010, to ask him, what he feels about his alter-ego’s slip up by hitting the sheets with ex-gal pal Lisa (Brianna Brown) while his wife, the loyal Robin, (Kimberly McCullough) was out of town.  And, what could be the possible fallout from long time Scrubs fans, and where the story is heading.  Here is what Jason had to say!

Is there plenty to be worried about here for Patrick and Robin?   This does not bode well that Patrick strayed from his devoted wife!

JASON: “I think there is enough to be worried about.  You know what?  I think, and I have said it before, it’s a lot if you are a scrubs fan, and it’s a little difficult, but at the end of the day, its story. We have not done much in this last little bit besides the postpartum depression material, and it’s a big change and a good change. I think its going to make them, Robin and Patrick, stronger in the end.”

How is working with Brianna Brown (Lisa)?

JASON: “She is great, and she works really hard. It’s the first time she has done the soaps, and we all are kind of working together on a story that is difficult to tell.”

Are you worried it’s going to be a difficult story for Scrubs fans to swallow, and of the pushback?

JASON: “I hope it’s difficult for them and there is some pushback.  We have our fan event Sunday, and I don’t look at anything on the internet, so I am kind of excited to see how people are responding…negatively or positively, or right down the middle.  If I get heckled I am ready for it, and I am good with it! “(Laughs)

Is Kimberly McCullough OK with the story?

You’re really involved in what looks to be a quadrangle with Steven, Lisa, you, Robin , and I am wondering where Olivia is going to fit into this? (A romance with Steven?)  There is going to be more fallout.

JASON: “Yeah, there is a lot more to every single scene now and a lot of people involved. Robin does not know, but Carly knows. Laura Wright (Carly) is so great to work with, and I love being on screen with her, and the process of working with her.  I am glad she knows, and the way she feels about Robin, and their history, it certainly adds another wrinkle to the story.”

Will Patrick sleep with Lisa again? What if she psychotically blackmails him to do so, or something like that?

JASON: “No. I don’t think so.  Even if she were to somehow try to blackmail Patrick, he would basically do anything to NOT sleep with her again.  I think the word “mistake” is maybe not the right word for it, but it’s the worst mistake he has ever made. I truly think he is sorry for it.”

"What If" AMC's Jesse and Angie met OLTL's Starr? Watch the video!

Wendy Riche on "If the AIDS story on GH originally was told through A.J. Quartermaine!

Cool interview. I am interested in how this storyline will play out. As long as the usually male slanted writing doesn’t have Patrick blaming Robin for his cheating (her being in Africa, her issues, competing with her old and dead loves,etc) and Robin apologizing then I’ll remain a Scrubs fan.

Great interview. Can’t wait to see how this storyline plays out!

Good interview! My favorite part the picture of Jason and Kimberly! As for the article itself my favorite parts are him saying Robin and Patrick will be stronger in the end (heck yeah they will be) and “No. I don’t think so. Even if she were to somehow try to blackmail Patrick, he would basically do anything to NOT sleep with her again.” I also agree with him about finally getting a story. I may not like how this all started but I am interested to see the fall out and the ultimate rebuild/reunion!

This storyline like no other since I started watching GH has me riveted and invested.I definitely think Robin and Patrick can work through this.It just will take a lot of time and rebuilding of trust. 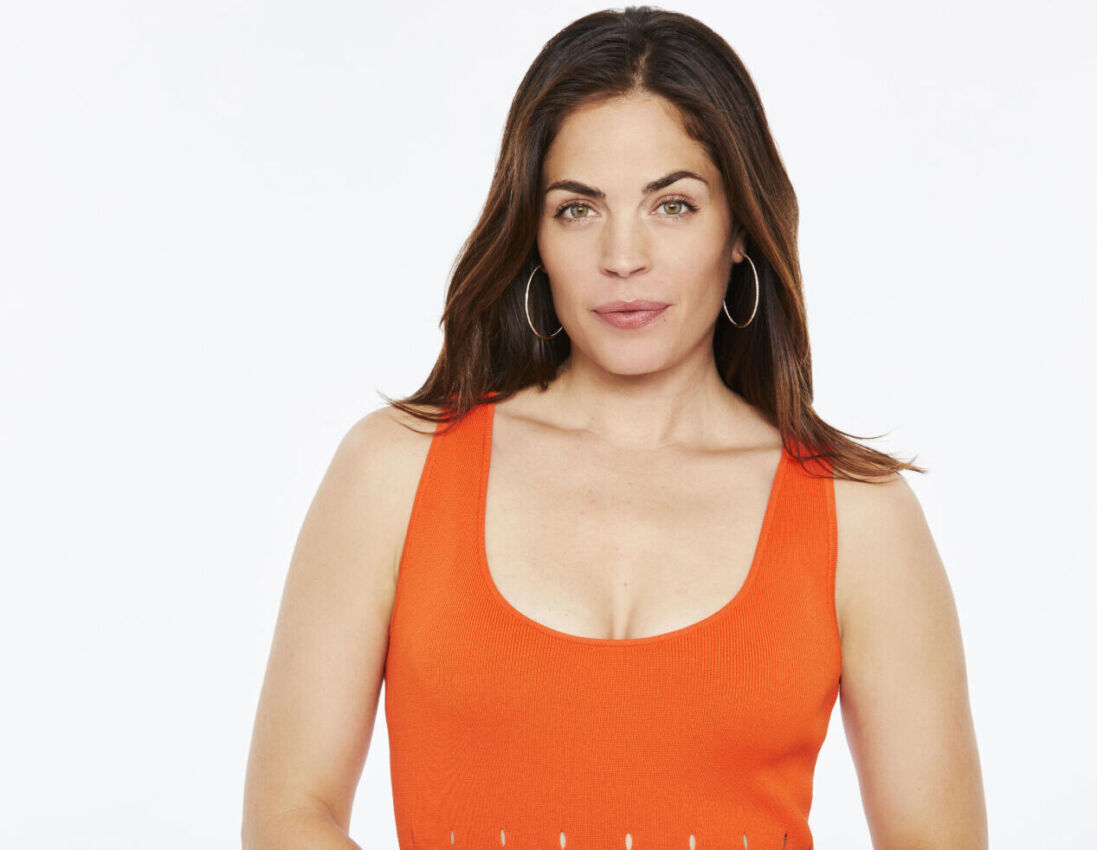 Just a few weeks ago on the January 4th episode of General Hospital, viewers were left devastated when Dr. Britt Westbourne succumbed to a fatal poisoning after a confrontation with ‘The Hook’.

While it was revealed that Daytime Emmy winner, Kelly Thiebaud, was exiting the ABC soap opera at the end of 2022, many thought the story would see Britt leaving Port Charles to deal with her declining health due to Huntington’s Disease in private, in order to keep the door open for a possible return down the line.  However, that was not meant to be.  When a report from Deadline surfaced back in August of 2022, it indicated that Kelly was returning to her primetime role on ABC’s Station 19, which caused some confusion and rumors of just what would Thiebaud’s ultimate status be with the daytime drama series. 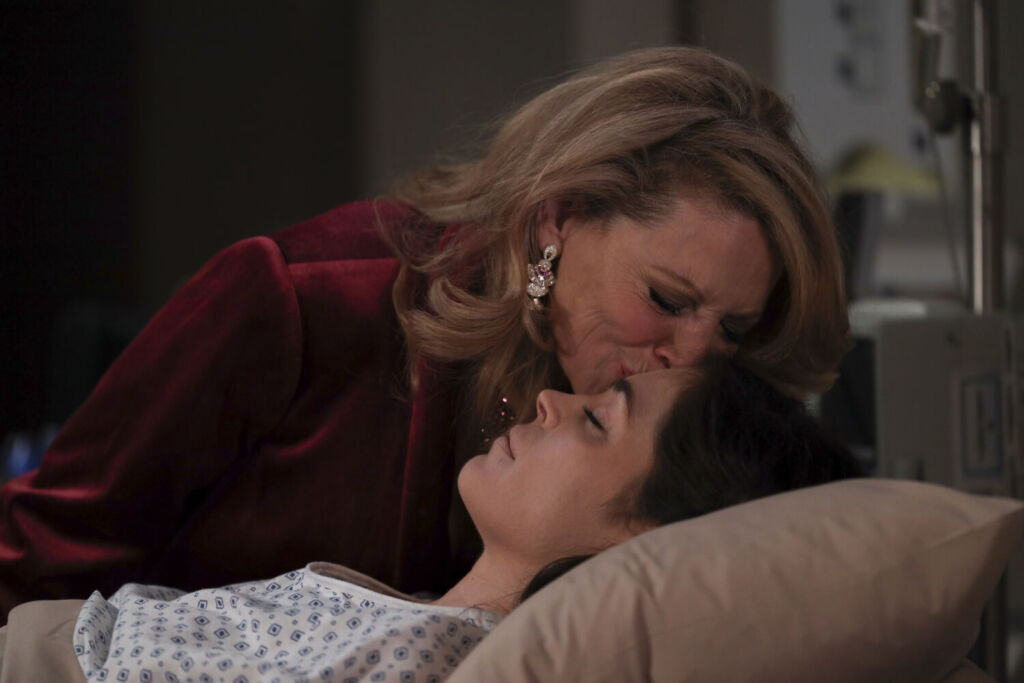 Now, in a very special exit interview for You Tube’s Michael Fairman Channel, Kelly chats with Michael Fairman and clarifies what led to her decision to leave her role as Dr. Britt Westbourne.

Talking with Fairman direct from London, Kelly, who won a Daytime Emmy in 2022 for the Outstanding Supporting Actress in a Drama Series, reveals how it came to pass that GH would kill-off the character of Britt by becoming another victim of ‘The Hook’, and more. 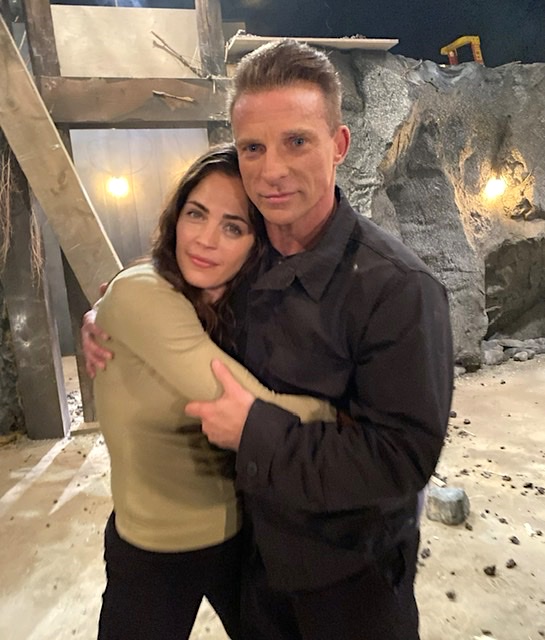 During the conversation, Thiebaud shares her thoughts on working with her former GH co-stars including: Steve Burton (ex-Jason), Parry Shen (Brad), Kirsten Storms (Maxie), Kathleen Gati (Liesl), Cassandra James (Terry), Roger Howarth (Austin) and Josh Kelly (Cody), as well as some of her favorite memories throughout her run on the series which began in 2012. 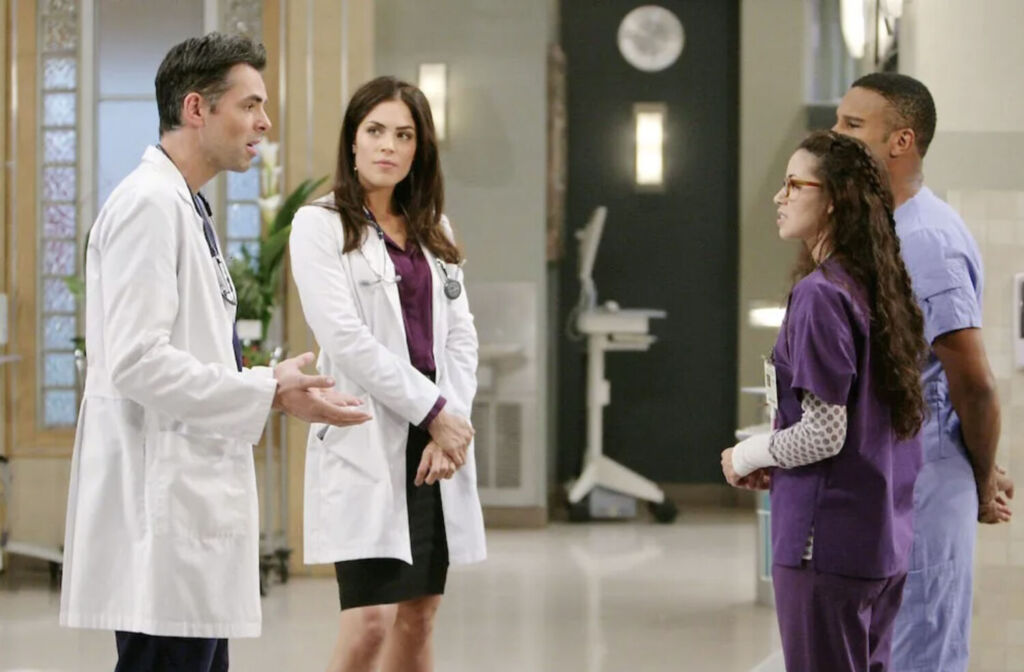 Kelly took the character from being the manipulative ‘Britch’ as an interloper in the romance of Patrick (Jason Thompson) and Sabrina (Teresa Castillo), all the way to becoming a well-loved character to root for. 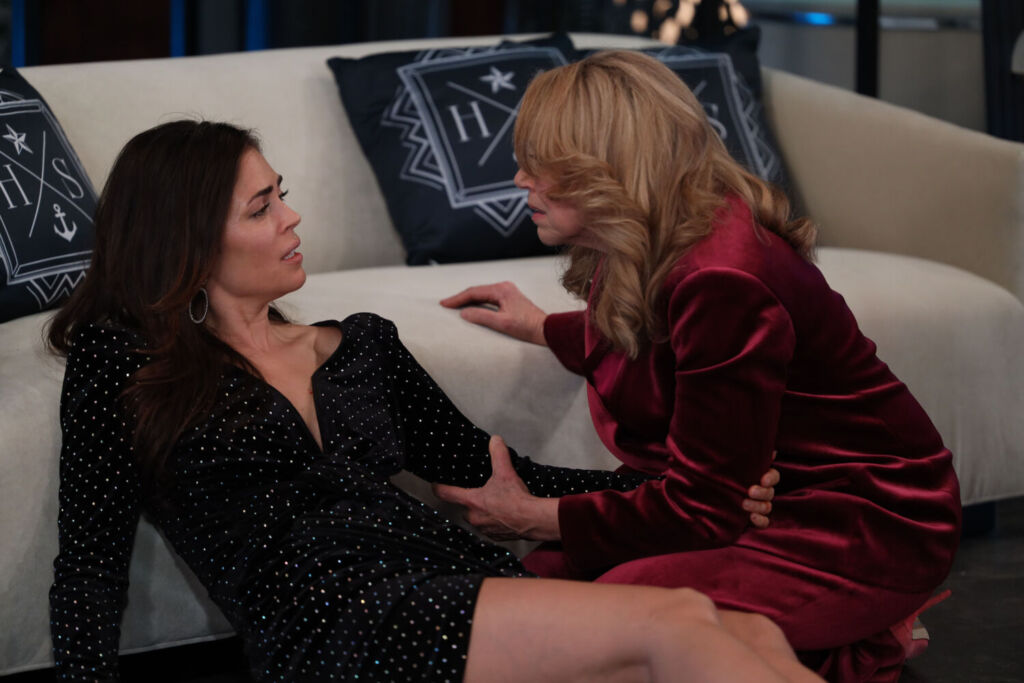 While, GH viewers witnessed Britt’s shocking death scenes, Kelly weighs-in on taping those moments, as well as Britt’s emotional goodbye birthday party, and having the opportunity to portray a character who was trying to navigate her life, while suffering from the effects of Huntington’s Disease.

In addition, Thiebaud gives a very special ‘thank you’ and shout out to the fans for their enduring support as she looks forward to new roles and new adventures ahead. 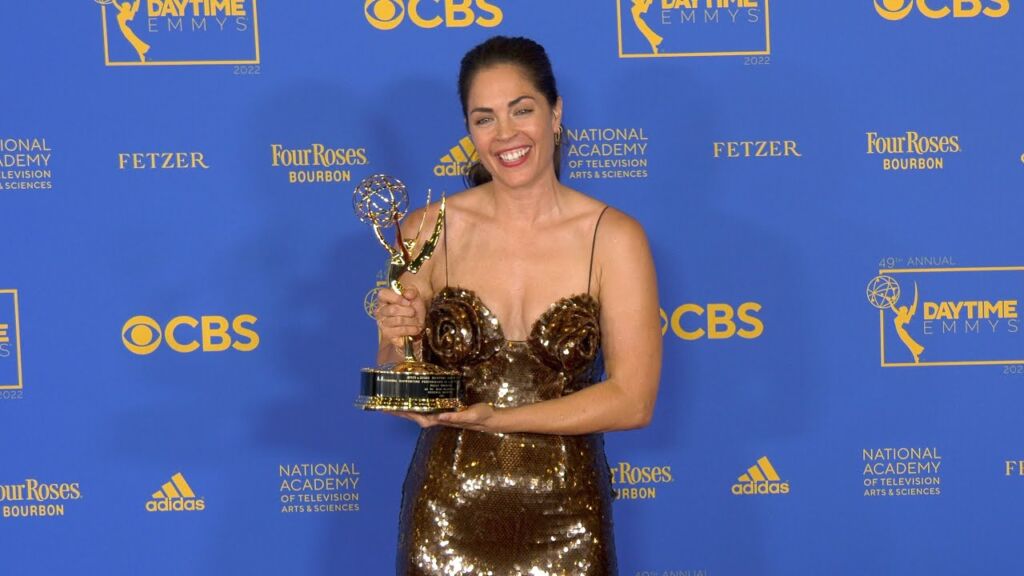 Check out our heartfelt farewell interview with Kelly below, and for upcoming celebrity features, interviews, event coverage, music videos, and more, make sure to ‘subscribe‘ to the Michael Fairman Channel.

So, what did you think about Kelly’s decision to depart GH? Will you miss her as Britt? Share your thoughts on our conversation in the comment section below. 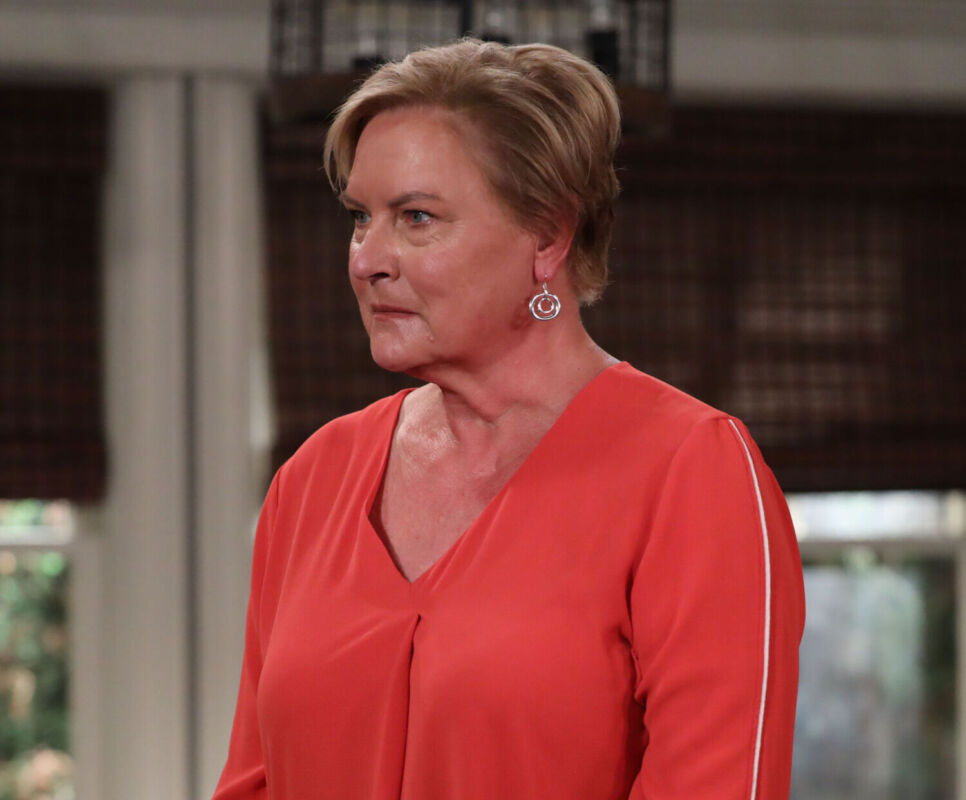 After a major fallout with her parents, Carolyn (Denise Crosby) and Jeff Webber (William R. Moses), Elizabeth (Rebecca Herbst) was devastated, in particular because they concocted a plan to make her forget all about the tragic situation earlier in her life. That being, when Finn’s (Michael Easton) late wife, Reiko, fell down a flight of steps and eventually died after she struggled with Liz.

Apparently, the story is not over, when Denise Crosby reprises her role of Carolyn beginning the week of January 23rd on General Hospital.

Talking about her return in the latest issue of Soap Opera Digest on newsstands now, Crosby previewed, “She (Carolyn) wants to make a connection with her daughter and try to make amends for something that is almost impossible to make amends for. She knows it could go really wrong, but she can’t live with herself if she doesn’t take the shot.” 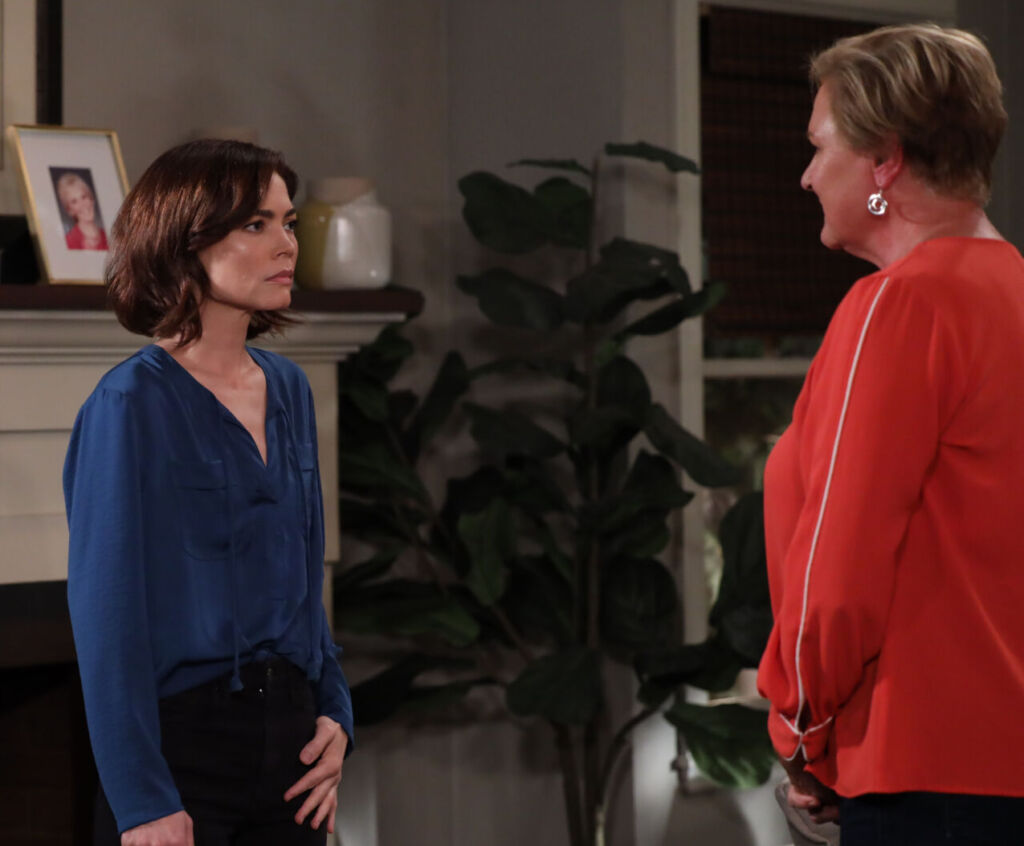 Something tells us there is more to the story of why Carolyn could have returned to Port Charles? Any thoughts?

Let us know your theories about Elizabeth’s mother upcoming return to Port Charles in the comment section below. 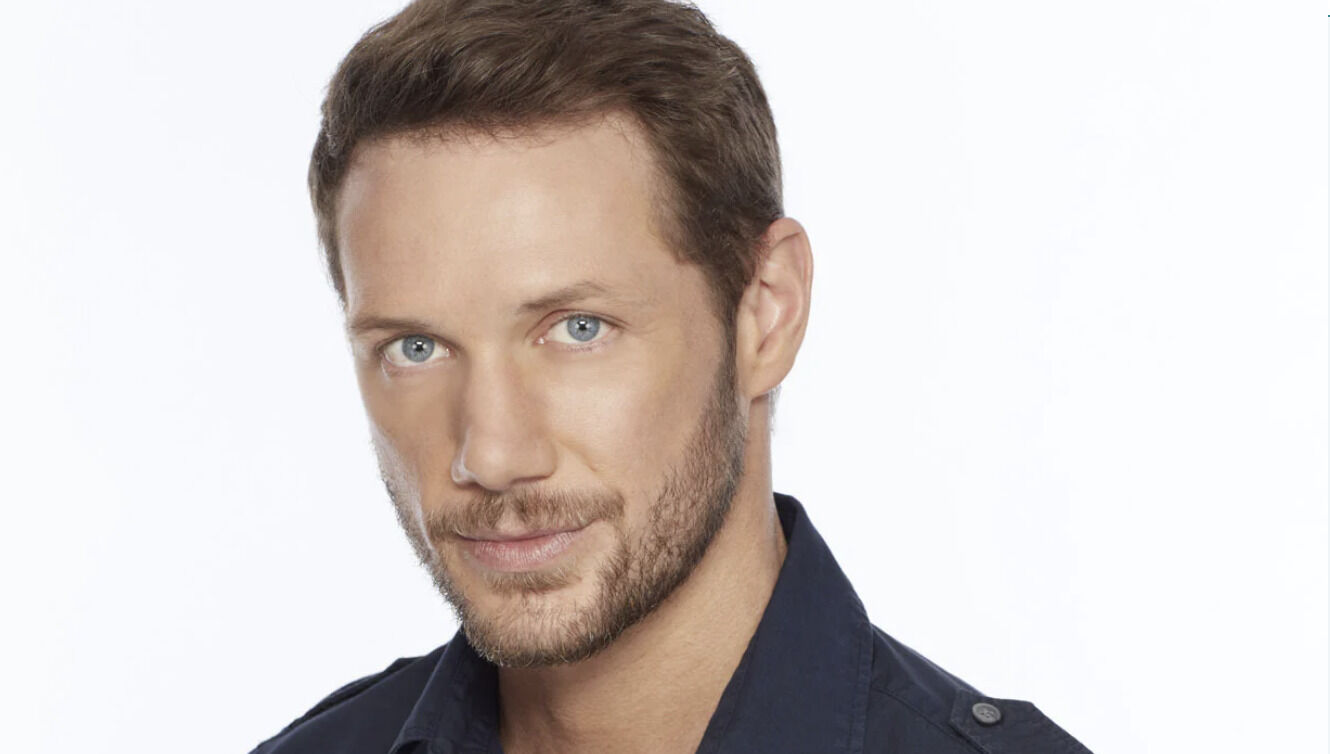 General Hospital alum, Johnny Wactor (ex-Brando Corbin) has made you cry previously during many tough storylines on the ABC daytime drama series. From the death of Sasha and Brando’s little baby boy, Liam, and later being the victim of ‘The Hook’, and more, theBrando had some heavy dramatic moments.

Now fans can check out Wactor in an extremely touching short film in the latest music video by the Nashvillains, for their single, There to Catch Me.

In it, Wactor portrays the character of Mason, who visits a house that held significance for him and his wife.  It’s where they spent their wedding night.  However, we learn that he lost his wife.  Throughout the short film, Mason has flash backs of their life together, and gets the shock of his life when his wife seemingly returns and they get to spend one last moment together.

Johnny took to his Instagram and shared: “Finally… the full short film – music video There to Catch Me is out! Please, please, do yourself a favor and enjoy this piece of art that so many talented people came together to create. Big thanks to @nashvillainsband and @bethanyashtonwolf for making me a part of this!”

The short film’s director, Bethany Ashton Wolf replied, “Loved directing you in this beautiful piece of song + cinema, Johnny. Memories for a lifetime.”

Watch ‘There to Catch Me’, the short film  featuring Wactor below.  Then let us know, what you thought of his performance in it via the comment section.