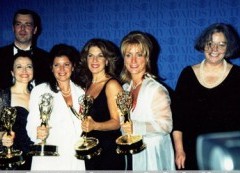 What if the character of A.J. Quartermaine would have been the main character that  drove the thrust of  the AIDS story that ended up being told through the love story of Robin and Stone on General Hospital back in the early 90’s? That is something that is discussed in part two of Wendy Riche’s interview at We Love Soaps.

Riche, the former executive producer of General Hospital, who was at the epicenter of many of the fantastic socially relevant stories in GH’s deep history, admitted that their originally was a bit of a dispute between then GH, head writer, Claire Labine, and Riche, as to what character would lead the AIDS story.   Here are some compelling excerpts!

Riche: “I wanted to do a story about AIDS when I first got to GH.  AIDS was on the rise, a non-discriminating disease that didn’t care who it attacked.  I felt it was an issue of great importance and wanted to find a way to interface many of the characters of Port Charles with the hospital.  At first, I thought it could be a story for A.J. Quartermaine.  I thought, what would happen if A.J. had another drunken night in college, one of many, and explore what would happen when a friend, a male friend, from college shows up at the Quartermaine mansion wanting A.J.’s help since his family threw him out because he had AIDS.  And A.J. doesn’t remember who had sex with who, and what he did during so many drunken orgies.  They could have both had sex with a woman who was a drug addict. The intention was not to make them gay, but the implication might have stirred up a lot.  We could have asked, “Why does everyone care so much if he was gay? Why does he care? How would Edward Quatermaine react and what would Lila do to bring the family back together?”  We could have looked at it all.  But it wasn’t about being gay, I didn’t want to be, “Oh those gay people, of course they screw around so much…” of some B.S. like that.   AIDS is a non-discriminating disease, it doesn’t care who you are are or what your sexuality is.  If you do stupid things, have unprotected sex, you risk getting it.  If we had done it with a gay character we would not have gotten the message of urgency across.  So the intention was to have a smart person who was not gay but made stupid choices get AIDS.  I didn’t have Claire at the time, and I don’t know if Claire would have even wanted to do it that way, but the network did not want to do that story. They didn’t want A.J. to be in question of having AIDS, or maybe not being 100% heterosexual, they just didn’t want to go there because he was a Quartermaine, which of course, is exactly why I wanted to go there.

I talked to Claire about this, and she came up with Robin and Stone.  She was not ready to do this story at the beginning of her run on GH.  But one day, a year later, we were at a company retreat dinner and she looked at me with that twinkle in her eye, learned over, and whispered, “I think I’ve got it.”  She told me the story in two lines and I loved it.  It was everything I hoped for.  We were so excited, we told Pat [Fili-Krushel] right then and there and she said to go with it.  Claire and I had driven up to Connecticut together for the retreat and what was wonderful is that we had the long trip to talk about it.”

So what do you think if the story had gone to A.J. instead of Robin and Stone?

GH's Jason Thompson talks, "Is there hope for Scrubs?"

Matt Ashford joins the cast of The Bay! Reunites with Mary Beth Evans!