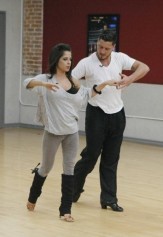 Tonight is the night for soap fans to back their gal, General Hospital’s Kelly Monaco (Sam) as she begins her battle to win her second Mirror Ball Trophy in the hotly contested Dancing with the Stars: All- Stars edition that starts at 8PMEST/7CST on ABC!

And while Kelly is prepping tonight’s routine with her new partner, Val Chmerkovskiy, DWTS executive producer, Conrad Green came forward and in an exclusive with TV Guide, revealing why he partnered the celebs with certain dancers, and the rule changes for this edition of DWTS that could possibly influence the outcome.  Or, does it?

Green, said of the Kelly and Val pairing,  especially since Kelly was the shows first season champ:  “It wasn’t even high-def when Kelly did it! (Laughs)  Kelly and Val are getting on real well and I think they’re both very determined to make it far, especially Kelly.  She’s gonna have to work that hard to keep up with the level of competition. That’s part of the challenge she’s embraced. But no matter what happens on this season, you always have your place in the Dancing pantheon.”

There are also some tweaks to the rule for the All-Star edition of the ballroom dance competition:  Celebrities will be creative directors of a dance for a week, for which they’ll come up with the theme and wardrobe, pick the music and all but choreograph their routine. Gone is the Dance Duel, which was introduced last season to prevent a Sabrina Bryan-like shocking elimination (though Green allows that it may return in a normal season) and in is a temporary scoring system emphasizing technique. “We’re thinking about having Len Goodman, give a couple of extra points to the celebrity who did the best technical dance of the night,” Green says. “It’s an extra boost; it’s not a punishment for everyone else. We’ll tweak scoring here and there to make sure there’s a bit more discipline and content in there, given that these people have done the show before.”

Now after the jump, watch a video interview with Kelly from KABC in Los Angeles on tackling Dancing and GH at the same time, and then let us know if you think Kelly stands a good chance at placing near the top of the leaderboard as she begins the competition tonight!

I won’t watch because I hate ABC except for GH. I will go online and give her my support.

The show is Dancing With the ‘Stars’! Who in the world is Sabrina Bryan and what was so shocking?? Never mind…. Don’t really care……. I’m still boycotting all ABC except GH.

I hate theses reality shows, they are just easier to produce and thats prettty sad considering the talented people out there should be seen instead.
So yes I’m against DWTS.

I love Kelly Monaco. I watched her the first time around and YES, I voted for her. She was one of the BEST dancer’s last night as well. She seemed like she slimmed down a bit, probably from all the rehearsing, which has so much more ahead, She doesn’t need to lose weight, however. Therefore she should drink some GAIN WEIGHT SHACKS so to not lose that NICE figure she has. MOVING FORWARD: I have watched Katie Couric’s talk show, unintentional. Now in fairness to Katie, she is a likeable personality type (that’s just the truth). On the other hand,… Read more »

PLEASE people, even if you are NOT waychign other ABC shows and don’t watch DWTS…. as it states above youcan still vote for Kelly every week – her phone # is the same throughout the competition! 1-800-868-3411 !!! Voting is open during the 2 hour show and for one hour after the show finished airing!

BTW…. her and Val were EXCELLENT last night!!! #teamvally all the way!

Oh yeah, they have half points this time, which makes the competition closer, but in the end, what difference does that make if America is voting? The first half is just a popularity contest really, until it gets down to the really good dancers after the people who can’t dance are eliminated. My DISH coworker thinks the show is fixed, but I’m not so sure. I’m just glad that I can watch it in less time now that I watch commercial free with Auto Hop on my PrimeTime Anytime recordings. That way I have time to watch another show and… Read more »

Who was the artist of the song Kelly and VAL performed their last dance of the night 10/1/2012?